Enslaved: Odyssey to the West (andy circus being a monkey, again)

Did you know Andy Serkis has done video games? It makes sense, he spends enough time doing voice acting and motion capture already – video games must have been a very small jump. He’s voiced Gollum in a few movie-to-game spinoffs, of course, but he’s also done work for a company called Ninja Theory (the guys that did DmC). In 2007, Serkis did voice acting for their game Heavenly Sword, and in 2010 he did voice acting and motion capture for Enslaved: Odyssey to the West. Enslaved came out on PS3 and 360, and in 2013 had a premium version or something come out for the PS3 and PC – the latter being where I stumbled across it. It’s worth mentioning for a couple of reasons – the biggest one being that it’s a bona fide adaptation of a Chinese story, which doesn’t happen very often in the West. The game is based on Journey to the West, a Ming dynasty (16th century) novel attributed to Wu Cheng’en. It’s also worth mentioning because it raises some interesting questions around the theme of control. It doesn’t do anything with its potential, but it’s got a great set-up – so that’s what I’d like to talk about.

As with Batman, this isn’t really a critique of the game, in the sense that the game didn’t set out to do any of the things I’m talking about. It’s not an internal critique, in that regard. I’m starting to feel like this is something of an external critique though, in the sense that it takes a step back, looks at the mark the game is trying to hit, and then says “You ought to be aiming much higher”. In the case of Batman, I think it’s clear that the game didn’t really have any great narrative aspirations. However, with something like Enslaved, it’s clearly trying to be a narrative-focused story that changes the way we approach story-telling – that’s clear from the interviews etc surrounding the game. Given that narrative focus, I think this metaphorical level is an important aspect of storytelling that very few games use well, if at all. 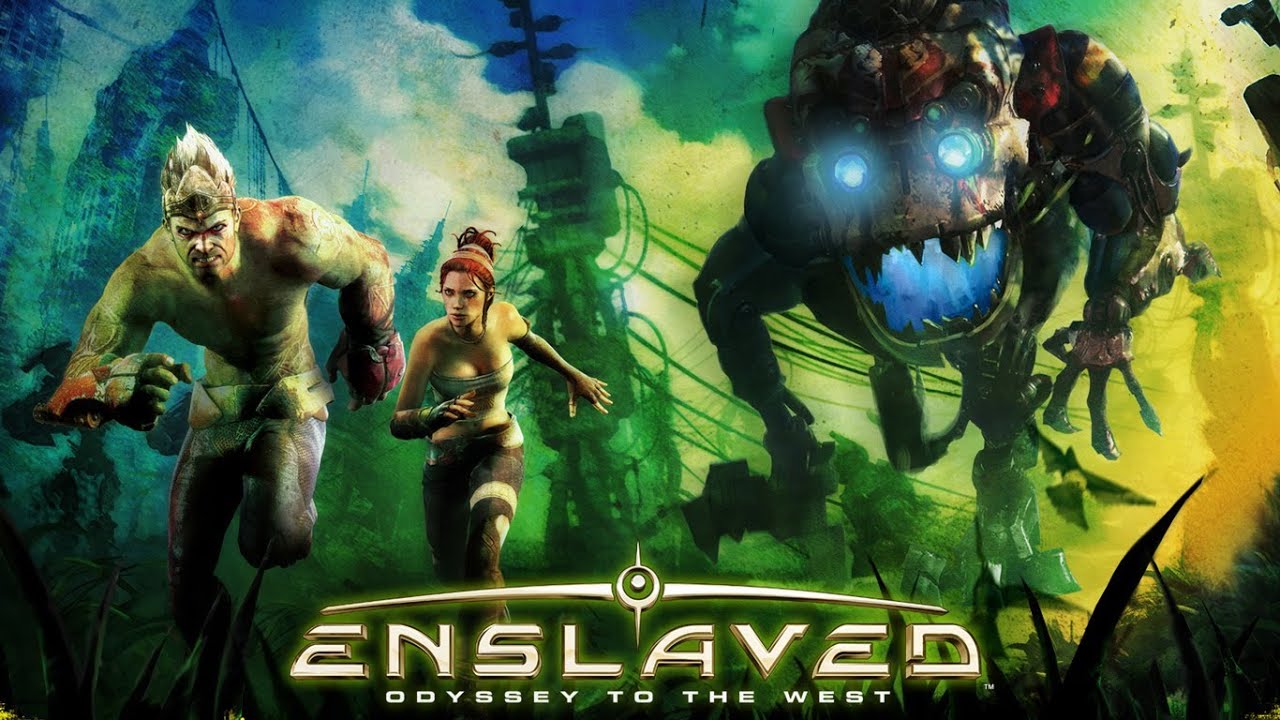 So: Enslaved. For our purposes, all you need to know is that the protagonist, Monkey, is on a prison ship which crashes into a foreign planet. When Monkey awakens, he finds that one of the other prisoners, a woman named Trip, has slapped a slave headband on him, thus providing the titular enslavement. Trip compels Monkey to return her to her village, some way to the west, and that’s the premise. There’s a really easy metaphor here – the player is ‘compelled’ to a certain goal in the same way as Monkey.

I use scare quotes around “compelled” because obviously the player isn’t technically forced to do anything: they willingly engage with a game of their own free will (shut up, determinism). That said, within the game framework, the player’s actions are constrained by the rules set forth in the code. If you’re just playing like a normal person, you have to play according to the game’s rules in order to make the win-state. Glitches etc really only prove the point: you’re not playing outside the rules by exploiting a glitch, because the glitch is only possible due to the code. You’re just doing something the developers didn’t necessarily intend – and that’s quite different to the authority of the game. So if you’re in an arena, and you have to beat X number of robots to proceed, the game doesn’t really care how you do it, as long as you do it and move on. The situation with Trip is kinda the same: you can basically do what you want, as long as you’re moving towards the goal, which is getting her home.

So there’s an easy metaphor here. It’s an opportunity for the game to explore what control, and choice, and the meaning of the relationship between player and computer. There’s certain limits to the metaphor – while the computer creates the environment that you have to traverse, Trip isn’t responsible for that. She asks you to pass through it, but that’s more about driving the plot – so Trip’s narrative role isn’t exactly the same as the technical role of the designers who created the terrain. By contrast, think of Portal, where GLaDOS actively created the test chambers for Chell. These areas where the metaphor doesn’t hold up aren’t necessarily aesthetic limitations though – they’re opportunities for counterpoint, or dissonance. The game also lays the foundation for the start of an exploration of the theme of control and choice. Even as Monkey is controlled by Trip, he’s able to issue commands to her. The developers have some chat about how they didn’t want the game to be one long esort mission, so there’s a symbiosis between the pair. Some of the platforming is resolved by Trip doing Trip-related things, like hacking or crawling under things. Sometimes she’ll do these things on her own, à la The Last of Us, and sometimes Monkey can order her to do stuff. It’s a bit anachronistic comparing this game to The Last of Us – coincidentally, actually, the lead designer of Enslaved, Mark Davies, also worked on TLoU, so there you go.

So anyway – I wonder if this foundation in the two-way control thing is actually counter-productive for the control/choice metaphor. There is a symbiotic thing going on, which is interesting for the player/computer relationship – Monkey, the controlled, issues commands to Trip, the controller, as part of negotiating the game, which raises the question of who’s controlling who. However, you also have to take the environment into account as a third party – if Trip and Monkey represent the computer and the player, what does the environment stand for? You could argue that the computer is represented in both the environment and Trip, but then things are starting to get messy. Monkey/player negotiates the game/environment with Trip, who represents what – the interface? The mechanics? Both of those are viable metaphors, but neither of them propel the narrative as Trip does – neither mechanics nor interface determine the goal of a game. They merely determine how one negotiates the game to get to that goal. Trip would be better off as Monkey’s motorbike, if that was the case.

So yeah – there’s some interesting potential for a discussion about power and control in Enslaved, but it doesn’t really take that discussion up. There’s some potential scaffolding for that discussion, but if it was to go anywhere, the developers would have to straighten some things out – like how the environment factors into the player/game relationship. Portal has provided a blueprint for answering some of these questions, with its perfect little meta-fiction, but the issue with doing a meta-game (a game about games) is that you can only make the points once, and then they aren’t original or interesting any more. Games like Enslaved have to find something else to hang their narrative hat on – and that’s exactly what Enslaved did. You’ve got the emotional hook of Trip, who’s in the uncomfortable position of doing a bad thing (enslaving Monkey) in order to get back home. That’s a really great premise for a character, and it makes for interesting drama. More about that next week…