So when we’re talking about Modern Warfare, or any of those other modern military shooters, we usually talk about how they make Muslims and Russians out to be evil bad guys who exist in a state of perpetual conflict and warfare. They’re savage, base creatures, incapable of sorting out their own problems. Today I don’t want to disagree with that statement per se, but I do want to read against the grain of things a bit. One of the things I noticed in Modern Warfare this time round is the presence of ‘good Muslims’, or ‘good Russians’. It’s a weird little area that I wanted to investigate further.

So there’s two main levels that I want to consider here: the drive to the execution site as Al-Fulani (‘The Coup’), and the level where you first rescue Nikolai, the informant (‘Blackout’). They’re right next to each other, operating basically as Missions 3 and 4, depending on how you count. In the Al-Fulani level, you play as the captured president of an unnamed Middle Eastern country (I think it’s actually supposed to be Saudi Arabia, somehow?), and there’s been a coup and you’re being taken to your death. While you’re driving there, you see the forces of Chief Bad Guy Al-Asad running around in the streets carrying out their own executions and breaking into homes. Obviously the evil soldiers are a major component of these vignettes, but it’s worth noting that the victims are too. We are confronted not only by violent Arabic militia, but also by a series of Arabic citizens being brutally murdered. At the risk of being overly blunt, Modern Warfare doesn’t just have bad Muslims. They also have victim Muslims. 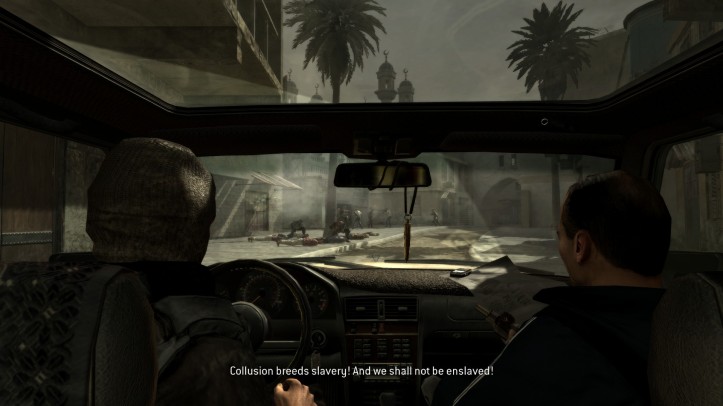 To be clear, that’s not necessarily solving the problems raised in the initial critique of the series. You never really meet any of these characters, none of them play any meaningful part in the story – they’re arguably just grist designed to emphasise how evil the bad Arabs are. But at the same time, it’s an interesting little nuance to how the game represents Arabic people. Even though most Arabic people in Modern Warfare are faceless enemies hollering in a foreign tongue with turbans and brown skin, some Arabic people are also their victims. Those victims represent a more peaceful time, a normal, civilized country. They just want to go to work, do their job, and come home to their kids. There’s nothing wrong with them having brown skin, or wearing turbans or whatever else. They’re just normal people in bad circumstances. Their presence in the game isn’t enough to counter the wider arguments about depictions of the Middle East, but they do represent this intriguing little thread that hints at something other than just ‘Muslim bad’.

We can say the same sort of thing about the Russians, although in that instance again the positive-ish depictions reinforce the wider problems. In ‘Blackout’, you meet Sgt Kamarov, one of the Russian Loyalists. During the events of Modern Warfare, Russia is in the middle of a brutal civil war, with the evil Ultranationalists fighting the good Loyalists. Price does express some ambivalence towards Russians in general (“Are those the good Russians or the bad Russians?” “Well, they won’t shoot us on sight, if that’s what you’re asking”), but I’m not sure that we’re supposed to take that entirely at face value. It’s worth remembering that at the end of the game, Kamarov is single-handedly responsible for saving the protagonist and Captain Price. Can’t be too ambivalent about a guy like that, especially given how Price and Gaz treat Kamarov when they get fed up with him. 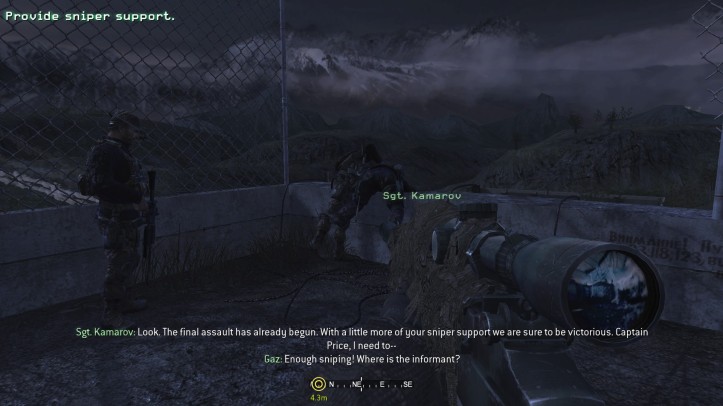 So the premise of ‘Blackout’ is that there’s an informant for the British who’s been found out by the Russian Ultranationalists. The lads are heading in to save him, and along the way they’re getting help from Kamarov and his men. Kamarov, on the other hand, has quite different goals. There’s a village controlled by the Ultranationalists, and they’re shooting rockets at civilians. Kamarov wants to take the village and save the civilians. Again – doesn’t seem like a bad guy. He does mess the Brits around a little, taking advantage of their extra firepower to help capture the village, but he kinda has a good cause. He’s trying to save lives and stop the baddies. The whole scene is similar to the one from ‘The Coup’, albeit with a few aspects thrown into a sharper relief. For instance, we don’t see these victim-Russians, so that whole dimension is pushed even further back than in ‘The Coup’, where you’re at least seeing those poor fuckers getting killed. ‘Blackout’ separates you from the impact of the violence by giving you no direct access to the suffering of the civilians getting bombed in the valley. They are, again, basically just grist for the evil Russians, and this time they don’t even physically appear on the screen.

At the same time, however, the trace of those victim-Russians gives you this idea that Russia as a whole could be something other than violent and awful. You spend the whole game fighting Ultranationalists, and so your take-away impression of Russians is going to be dominated by that focus, but the victims still exist as a trace of another way of being for that community. The difference is actually emphasised in ‘Blackout’ by the fact that you’re directly aiding one side in a civil war. You’re fighting for the good Russians, for the people who’re trying to save lives and preserve the integrity of their home. There is something else out there besides this dominant vision of Russia, or of the Arabic world. It exists in the margins and alleyways of Modern Warfare.