Moving On after Death: BioShock and Rogue Legacy

One of the topics in video games that I find really interesting is the line between game and story. If you’re playing BioShock, there’s a narrative reason for combat (because everybody’s gone crazy), and that narrative reason also provides the heart of the gameplay (kill all the crazy fuckers to get where you’re going). Sometimes there’s things that happen primarily for narrative reasons, like cutscenes or long rambly dialogue over crackly radios. There’s also things that happen primarily for game reasons, like boss fights, or those extended arena moments where there’s waves of crazies for you to fend off. In those moments, we can see priority being given to one or the other, although usually the less-prominent one retains some grip on the environment. What I want to talk about today is the theme of death. It’s primarily a game thing, in the sense that it’s a fail-state for your game (which is, after all, competitive), but I’d like to look at how and why it gets integrated into the narrative.

So as you might have guessed, BioShock is going to be one of the prime examples here, alongside Rogue Legacy, which I found had a really interesting approach to death. In BioShock, when you die you find yourself waking up in a revive-y tank thing (Vita Chambers), and then you’re released back into the environment. These Vita Chambers are diegetic, which is to say that they’re part of the world of the narrative. It’s like in horror films – if you’ve got a shaky-cam movie, the recording of events is part of the movie, so the actual technology that the film is made with gets incorporated into the world of the narrative. Contrast a Pixar film or something, where the ‘camera’ is never really acknowledged within the fiction. Anyway, if you die these Vita Chambers bring you back to life, and there’s a weak-ass excuse as to why they only bring you back to life and not anybody you kill – basically, spoilers, they were tuned to only bring Andrew Ryan back to life, and you’ve got something resembling his genetic code, because you’re sort of his son, so they work on you too. However, if these chambers were only in the testing phase, I have no idea why they were already installed everywhere throughout Rapture. 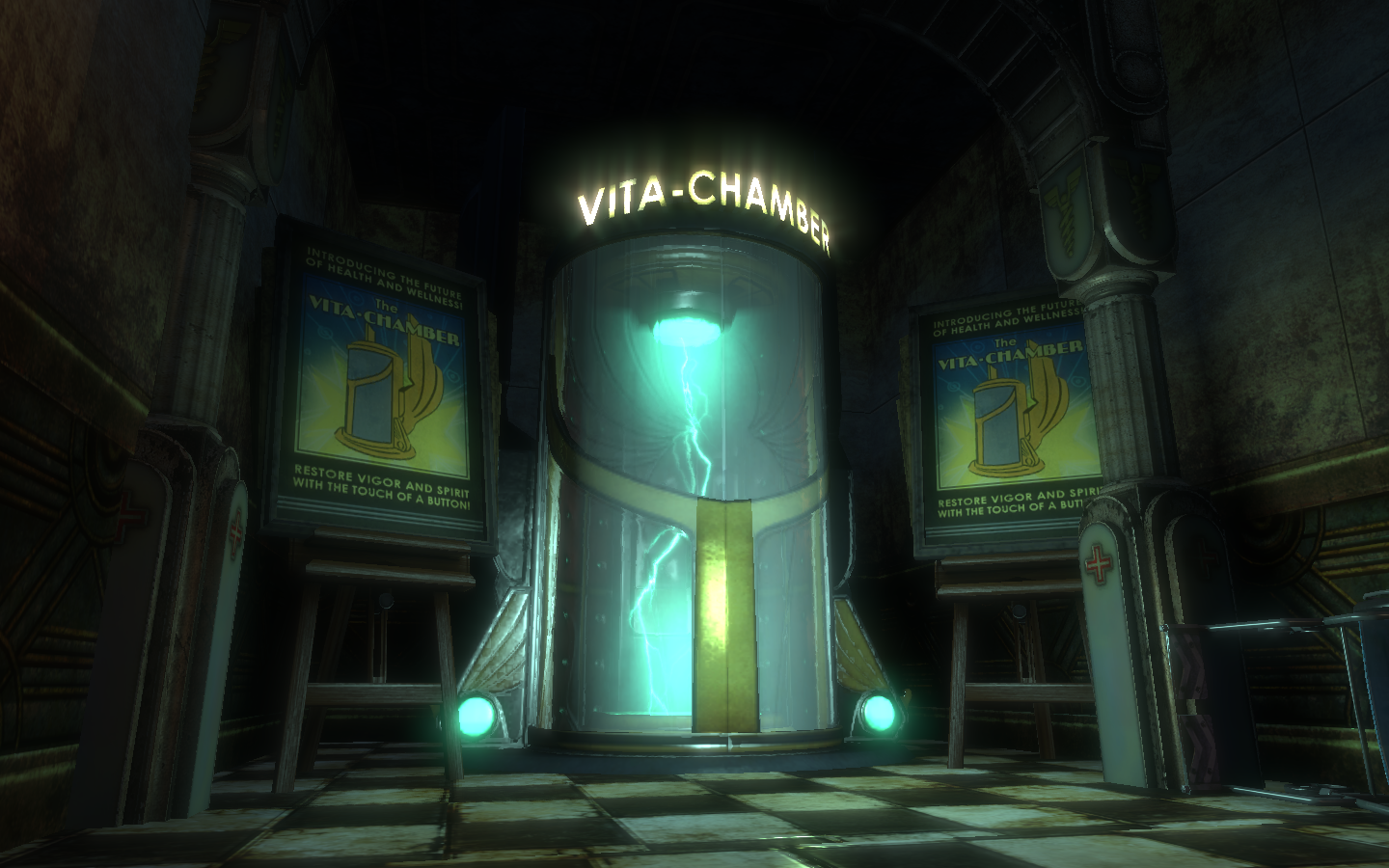 So it’s a weak excuse, really, but they’re trying, so that’s something. The important thing is that death, which is normally an exclusive aspect of gameplay, is here being linked into the diegetic world of the story. Let’s take, for example, Modern Warfare or something. If you die, there’s a mildly patronizing quote that comes up on the screen, and then you’re boosted back into the action about thirty seconds before you died. Your death is never really acknowledged on a diegetic level – it’s not integrated into the story. It’s just wiped from existence, as if it never happened – so it’s what we refer to as ‘non-canonical’. Obviously it’s still part of the experience of the player, but the player typically doesn’t think of it as part of the game’s canonical story.

By contrast, in BioShock, what we have is the possibility for death to become part of the ‘canonical story’ – obviously it’s not permanent death, as you’re quickly resurrected, but what’s interesting is how that resurrection takes place within the confines of the game. It might not be a big main flashy event, like the death of a main boss like Sander Cohen or something, but it’s part of the story in the same way as any other aspect of the gameplay. If you’re being chased by a Big Daddy and you run up the stairs, that action has a diegetic status. You probably won’t remember it, and if you were to describe the story of BioShock you probably wouldn’t include your death, but then you probably wouldn’t include that time you electrocuted a crazy in a pool of water – that doesn’t mean it’s not part of the story.

Rogue Legacy does a similar sort of thing, in that it gives death a diegetic status. If you die, you’re dead (that’s the ‘rogue’ part), and your child goes into the castle (that’s the ‘legacy’). They get most of your gold that you’ve earned, build up the family house a bit (get more points, more skills, more equipment etc), and then off they go to keep building up the family name. When they die, their child does the same thing – so there’s a cumulative hereditary aspect to death, and you can go back and view your family tree, see all the previous runs you’ve had, and whether or not those characters got very far. It’s a nifty way to introduce a narrative element to death, and it’s also cool as a way of integrating the failure game-state into the narrative of the game. You die, you progress onto your heir – and there’s actually a ludic progression as well as a narrative progression, because it’s the next stage of the game, making additions to your house. 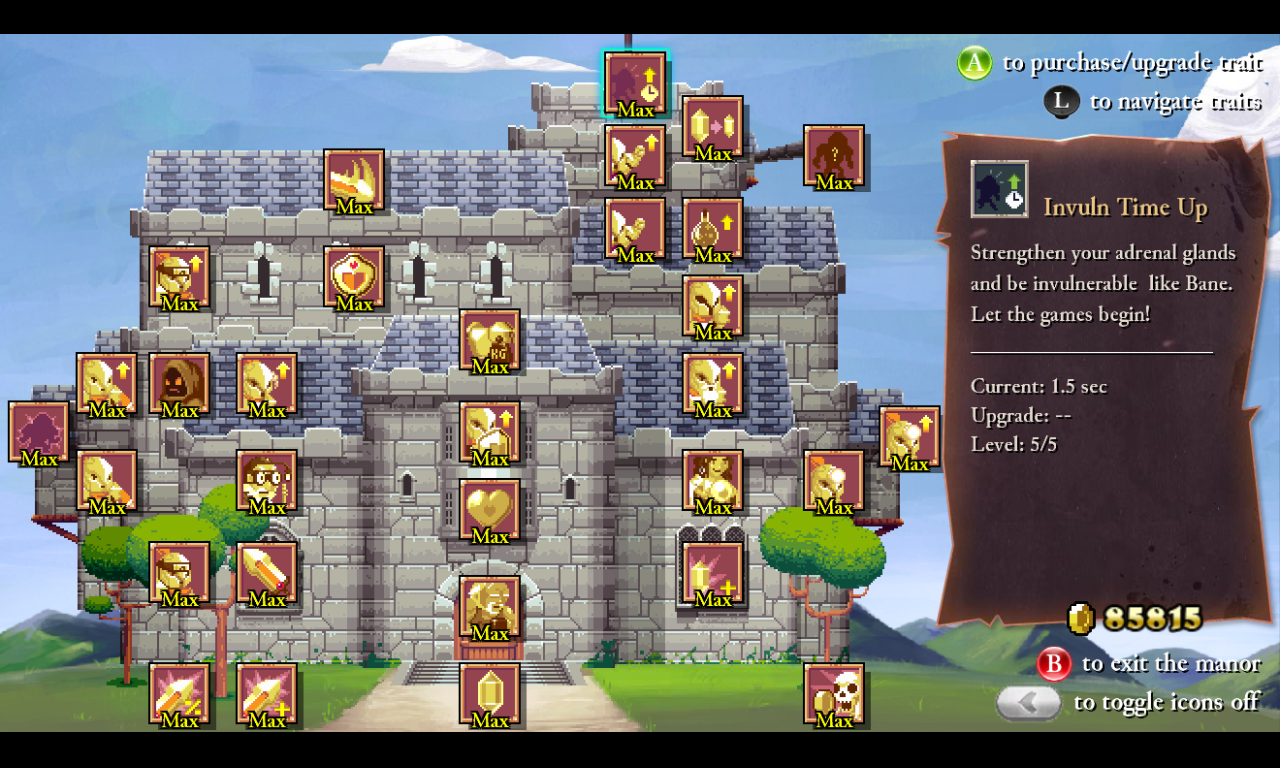 So that’s all well and good, death and progression and narrative all wound up with each other, but what does it actually matter? Well, for one it’s an interesting way to extend gameplay. What’s really going on is that death, which is a gameplay tool for indicating a state of failure, has been given a progressive function, rather than simply being a case of “Oops! Wrong turn! Better back up the truck!”. When death becomes a point of progression, rather than simply setting you back thirty seconds, the gameplay feels smoother and less disjointed – and papering over with narrative is part of the way to create that smooth feeling. Rather than pausing play to reverse a stupid decision, interrupting the flow and immersion, games like Rogue Legacy choose instead to keep pushing forwards, making that death a catalyst for the next stage of play. BioShock, by contrast, has a more superficial approach, in that it essentially works like Modern Warfare. It’s more or less some form of a reload, dragging you back to a predetermined checkpoint and making you wade back to where you left off. There’s still narrative wrapped around that dragging, but it’s not progressive – and that’s the difference between the two.