Chances are, if you’re a gamer, or even if you potter around various Let’s Plays on Youtube, that you’ll have stumbled across Scott Cawthon’s Five Nights at Freddy’s games. If you haven’t, stick around anyway! Today we’re going to take a quick look at how those games create fear in the player. I mean, you know, there’s the obvious jump-scares, but there’s actually something more interesting going on as well.

The basic premise is pretty straightforward. You’re a night security guard keeping an eye on a restaraunt full of six-foot animatronic robots dressed as various cuddly creatures, and they will try to kill you. You sit in your booth (you can’t walk around – note the disempowerment of the player), and you’ve got two doors that you can lock when you hear the monsters coming. However, at the same time, you’ve also got a battery life, so you can only expend so much electricity before the battery runs out. The battery keeps the doors shut (don’t ask, it doesn’t make sense), as well as running the lights outside the door (so you can see if they’re gone) and the cameras placed around the building (so you know when they’re coming). When the battery’s dead, everything stops working, and you get mulched.

Let’s just talk about that door-closing mechanism for a minute. Basically what we’ve got is two competing objectives that require non-complementary methods. The big goal is staying alive, and the long-term/short-term plans for that don’t mesh well together. On the one hand, you need to play the short-term game and shut the door to stop yourself dying – but on the other hand, if you shut the door too much, or leave it closed for too long, you’ll drain your power and die in the longer term. The two different strategies actually tug against each other, in that regard – a kind of anti-synergy. If you over-do one strategy, you’ll neglect the other and die by jumpscare. You’ve got to perform a balancing act with ever-diminishing resources – and, of course, each night the frequency and activity of those animatronic bastards increases, so you’ve got to make the act more precise every time.

It’s a pretty stressful environment, when you think about it – and that’s the point. It provides a breeding ground for self-doubt and uncertainty: when you’re just learning to play the game, you’re not going to know what the balance is, so you’re going to make mistakes and you’re going to get murdered. By that logic, the game should theoretically become less stressful for more experienced players, as they know better how to balance things (plus they probably get a little blase about these screaming monsters). Nevertheless, the environment’s there for earlier players. We’ll expand on that another time – there’s some interesting points to be drawn out there. 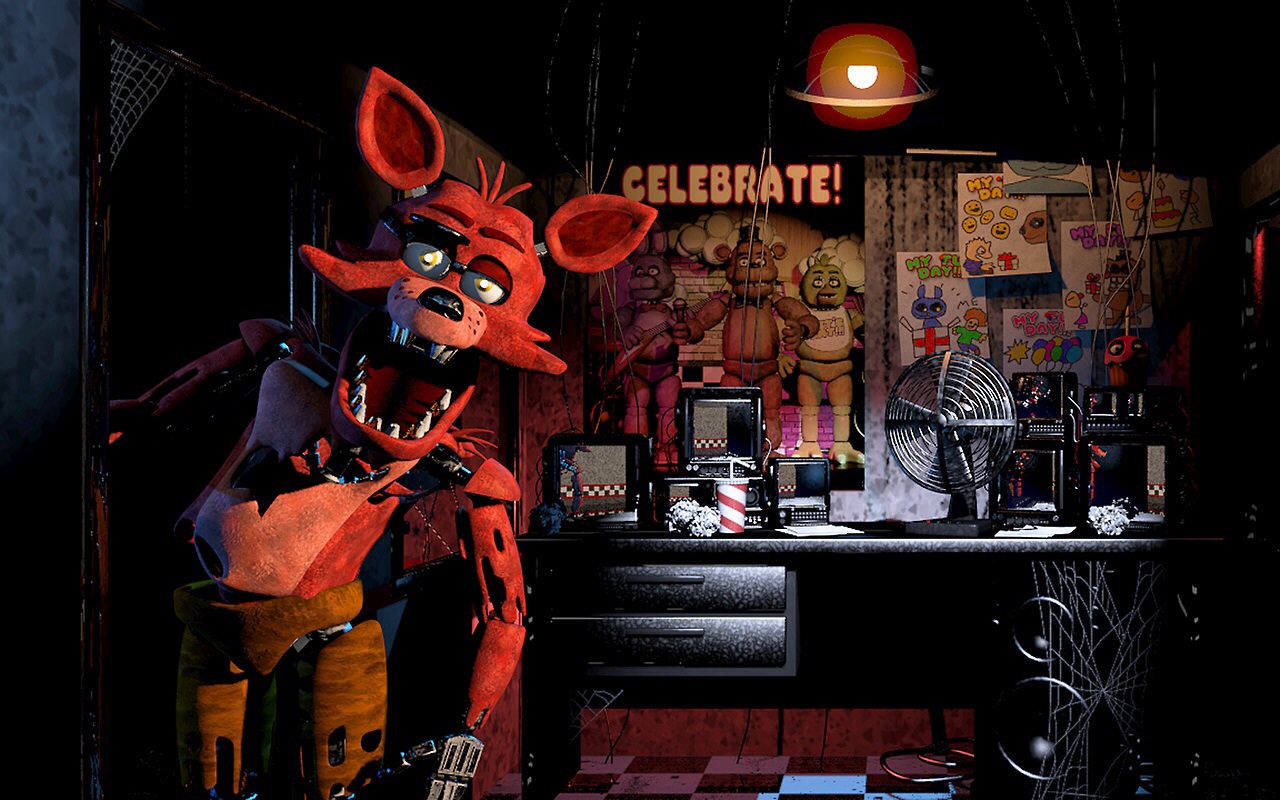 Along with the gnawing sense of self-doubt, there’s also significant stress for the player in that they sometimes have to do nothing. You can’t always be using your cameras to check whether Bonnie’s in the bathrooms or the dining room hall – you’ll run out of power, and then you’ll die. From what I’ve seen of the more experienced players, they’ll check the two closest cameras, right outside the door, and that’s it. Well, okay, they’ll check Foxy as well, but never mind that right now. The point is that you want to use your cameras as little as possible, because you need that juice for when the monsters come a-knocking. This results in periods of silence, where you sit in the office, listening to the whir of that blasted fan, and just… waiting. Then camera, camera, lights… and waiting. I think that inactivity might drop off towards the later nights, but from my brief play-time, it was certainly the worst part! The waiting compounded the anxiety – I wanted to be doing something, not just sitting back passively waiting for something to scream at me. I was nervous, and the inactivity made it worse.

The last thing to note in passing is the jump-scares. Yahtzee from Zero Punctuation has a deep-seated dislike of jump-scares, although I think he’s wrong on that count. Although I can agree that they shouldn’t comprise the entirety of a game’s horror, I think they have a specific place in the arsenal of the horror auteur. The jump-scare is loud, obnoxious, and upsetting on a purely biological level – it gets the adrenaline pumping. Because Five Nights gets so demanding, in terms of strategy and player performance, the jump-scares become all the more jarring insofar as they jolt the player out of that focused state.

Have you ever been in a situation where you’re trying to do something complicated, and you’re really focused, and then some dickhead sneaks up and scares you? Because you’re so preoccupied, the scare is often worse. There’s a similar example in horror films – if you’ve got a long shot, say down a hallway, the audience are focused on a point that’s off in the distance. An effective jump-scare would be to pop something up right close to the camera – so, biologically, you’re scrambling to readjust your focus, and you’re in a hurry, because your inner primate doesn’t want to get eaten, and because it’s a bigger jump it’s more stressful and difficult. I’d use an actual example if I had any sort of background in film, but I don’t, so I won’t. It just seems like a thing that probably exists.

Of course, at the same time, the more you play Five Nights the better you’re getting, so I imagine people get to the point where they know if a jump-scare’s coming – which sort of robs the terror of the whole thing. And yes, jump-scares do have a distinct shelf-life. They get stale pretty quickly, and if it’s all a game has got to stand on, it definitely loses its sheen. That said, I think Five Nights does a pretty good job of ramping up the difficulty, which (to my knowledge) is what people stick around for. There’ll be more to say on these sorts of games next week – Five Nights is by no means the first in its field, and there’s other interesting points to draw on. See you then!