The Dark Descent: I’m Not Scared

So last week we talked about Five Nights at Freddy’s, and how it manufactured a stressful environment to maximise potential for scares. This week, we’re going back to a previous work that did the same thing in a landmark fashion: Amnesia: The Dark Descent. Everybody’s heard of it (and if you haven’t, well, you’re in for a treat). The Dark Descent came from the folk who made the Penumbra series, which was particularly noted for the way in which players weren’t able to fight the monsters. There was none of the Dead Space bombast of ‘scares and shotguns’ – or any of the others, you know the big offenders. In Amnesia: The Dark Descent, they took it to the next level.

The Dark Descent pulled the trick we talked about last week, where two vital strategies both conflicted with each other. In The Dark Descent, you would be chased by twisted misshapen monsters. If you were in a brightly lit room, they’d see you, and you’d die. If you hid in the dark, well, you’d go insane, which wasn’t much good. In terms of optimisation, The Dark Descent probably could’ve pushed a bit harder, because going insane doesn’t really kill you – you might get knocked out, but that’s about it. You wake up sort of five minutes later and continue happily along the way. Nevertheless, it’s a good first go at this idea of two competing impulses that create conflict for the player. You’re in the light, you die, you’re in the dark, you go insane. It also wouldn’t let you fight the monsters, which is a trick that Five Nights at Freddy’s pulls too. It’s all about disempowering the player. 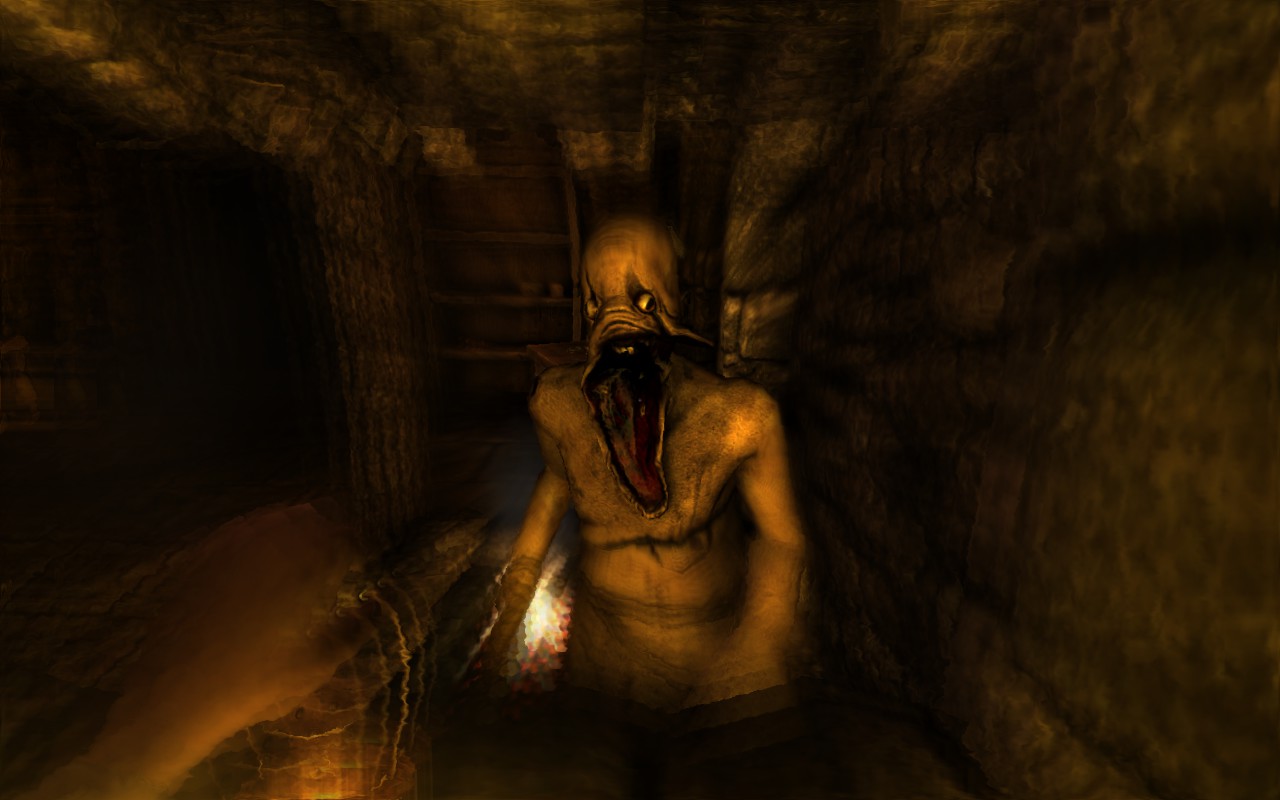 So that’s The Dark Descent, and it’s cool, but I don’t want to just rave about it today. It came out when I was back in high school, and although our group really enjoyed it, there was one friend who insisted that it wasn’t a scary game. At the time I didn’t think much of it – to me, it just seemed like an unwillingness to engage with the story on its own terms, which I considered the height of disrespect. Looking back now, however, there’s some more interesting things going on.

Firstly, let’s acknowledge the fact that players don’t have to engage on the terms of the game. It doesn’t matter if the game ‘wants’ to be taken seriously, any more than it matters if Tommy Wiseau’s The Room ‘wants’ to be taken seriously. Sure, that might be how the text is designed, but that intention doesn’t matter once the text is in the hands of the audience. It gets brought to life through the audience-text relationship, so that’s the only relationship that really matters. This is even more significant for video games, because we’re not just talking about the way the audience interprets a text – we’re talking about the way the audience plays.

What’s evident here is that the player doesn’t have to play the game in the way that the designers intended. That might seem entirely obvious, but it’s worth mentioning, because it affects the way games are built. There is such a thing as a subversive way to play – take, for example, the ‘Dead In Iraq’ project. Basically this guy stood in the middle of a map in “America’s Army” (think Call of Duty) and just typed the names of dead US soldiers into the chat. He got shot lots, obviously, and there’s a whole big wanky performance art metaphor about playing games and propaganda and the line between real and fake death and real and fake war, whatever. The point is that the way he played the game is subversive. He didn’t do what you’re ‘supposed’ to do in those games, which is run around shooting people.

The point here is that we can’t just appreciate video games in terms of the rules as laid down by the developers. The Dark Descent is a case in point – sure, it’s well set up to be scary, but it’s also well set up for subversive play-throughs where you climb up a bookshelf and hurl boxes impudently down at the monsters. This has important repercussions for understanding video games, because there’s a point where the rules alone just aren’t sufficient. They’re a start, and they show you contingencies that the developers prepared for, but it’s not the whole picture. The final product is the game as it’s played, not as it’s designed to be played.

Of course, that doesn’t mean we can’t appreciate the game rules on a more general level. We know that The Dark Descent was well-designed, and we know that it scared heaps of people. We also understand the lovely little cocktail of game mechanics that contributed towards that result. Really the only point here is that we can’t restrict video games to that rule-based meaning – and that’s a fair enough point. It certainly sounds less dramatic when you put it that way.

There’s some other big interesting questions about where the text actually exists, but we won’t go too far into those today. When you’ve got a book, it seems like a simple question – the text is right there, the words are on the page. The text must be this physical book in front of you. That idea got challenged when we realised that different people have different and equally valid experiences of a book – so some people might hate a character, and when they read the text, the reality is that that character is hated. For somebody else, they might love the same character – so the ‘reality’ of the text is actually totally different for each person. So then: where is the text? It’s clearly not just the words on the page, because those are objectively the same words for each reader. What we come to is the conclusion that ‘the text’, if we can call it that, is created in the relationship between audience and book. The same is true of video games: it’s not just about the rules as laid out by the developer. Rather, as The Dark Descent highlights, it’s the relationship between player and game that creates the final text.