This week we’re still talking about Submerged, which uses a couple of fixed-perspective shots I quite liked. Fixed-perspective is something introduced to video games from film – obviously when you’ve got a film, you (usually) don’t get to pick what angle you’re looking at things from. The director makes a decision about the framing of the shot, and that’s what you look at in the film. By contrast, most video games (at least today) tend to go with more player-centric shots. They either follow the protagonist with a first-person or over-the-shoulder view, or they go for a god-view (think Worms or something, all those 2D sidescrolling/platformer games that allow you to see the bigger picture of what’s happening).

There’s a very simple reason for this player-centric camera: it’s practical. Fixed-perspective shots are a pain in the ass, and (although I’m not an expert) I imagine that’s why they’ve faded from use. They still show up from time to time – I remember coming across them in Lego Star Wars. Part of the issue is that fixed-perspective shots can make it difficult to know which way you’re moving. Where in the previous screen you were moving left, the new screen might mean that left is now up, or right, or – even worse – it will take you straight back off the new screen into the previous area. Fixed-perspective shots are also disorienting for the player. You run into a new screen, and you have to spend a brief moment figuring out which part of the screen you’re on, how the space is organised, where you’re going, and whether or not there’s anything trying to kill you. It’s a brief moment, and it largely wouldn’t exist in repeated playthroughs, but the fact of the matter is that there’s a whole process of re-orientation that simply doesn’t happen in first-person or over-the-shoulder shots.

Of course, you still have to register what’s in front of you in a first-person video game, but the framing of what you see is consistent. Think about it in terms of film: if you’ve got a shot that’s centred on the left-hand side of the screen, and then the next shot is centred on the right-hand side of the screen, your eyes have to jump across the screen to focus on the opposite side. In over-the-shoulder shots, you never have that readjustment, because the focus is always in the same place – it’s one long continuous shot. The same is even true of those god-view or top-down games – there’s just the same perspective the whole way through. It’s nice and stable.

So I’ve never really had much experience with fixed-perspective shots – that’s probably not even the technical name for them. However, they come up from time to time in Submerged, and I actually really enjoyed them. There’s a few different cool things they do, and I thought we might discuss those things here. Once more, please excuse the horrible pixelation – I was running this game on lowest graphics, because apparently that’s all my poor computer is capable of doing.

For the most part, Submerged is actually over-the-shoulder shots. It’s only sometimes that it jumps to these fixed-perspective frames. Here, the protagonist is halfway up that ladder – you can see the little brown splodge of hair. It’s a very long ladder, leading to the highest point in the game, and although it starts off with you climbing in an over-the-shoulder shot, there’s a couple of points where it jumps to this fixed-perspective.

Note the tidyness of this particular instance – you’re climbing a ladder, so you can only move up and down. There’s none of the directional ambiguity that plagues other games. It’s one of the strengths of the ‘climbing-up-buildings’ thing – because you’re on the face of a building, the third dimension is cut out, and movement is restricted to up, down, left, and right. There’s also no ambiguity about which way those directions move you. If you have a long view down a corridor, for instance, the ‘Up’ button on the keyboard might move you forwards down the corridor. By contrast, if you had a side-view (cf. Mario), the ‘Up’ button would probably move you towards the far wall (which, from the long view, is moving left). When you’re climbing up a building, there’s no such ambiguity. The directional keys are relative to the building, not the camera.

The other thing is that fixed-perspective shots like this are actually really powerful story-telling techniques. I presume that’s why they came into existence in the first place. There’s a reason they’re used as part of the story-telling apparatus in film, and it makes sense for that impetus to be brought through into video games. In this shot above, it looks as though something’s watching the girl. We see her from the perspective of a watcher, tucked away in the building, shielded by tarpaulins and leaves. The watcher is at a distance, unobtrusive. It’s an indirect way of telling us that the girl is not alone in the city – and sure, there’s much more heavy-handed instances of the warty post-human creatures, but this is just nice and subtle. It’s a way to tell the story without beating us over the head with it. 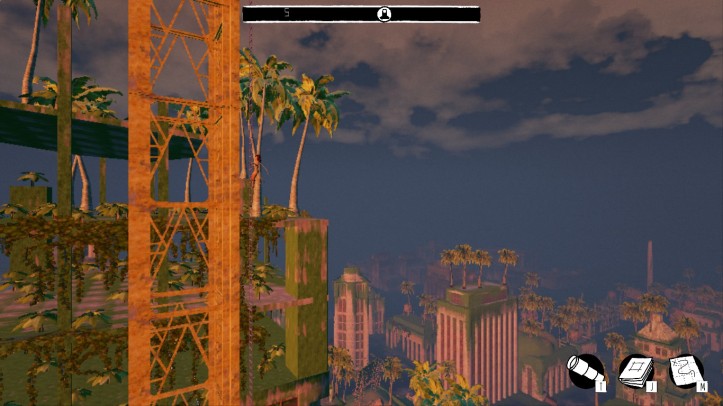 The other instance of frame-based storytelling is this image, just above. It’s just a nice and quiet way to show off the state of the city: abandoned, consumed by nature. This is probably one of my big issues with games – we have all these lovingly crafted environments, but we don’t use the environment that much. As players we’re often too focused on shooting the bad guys to really appreciate the beauty of the environment – it doesn’t have a use-function, and we are in the middle of a game, so the environment can go largely unnoticed. This fixed-perspective shot is a lovely way to show off the environment without interrupting gameplay. The player is still technically playing, because they’re climbing up the ladder, but it’s a menial enough task that the developers can focus on showing what the world is like. Multi-tasking, yo.