Dark Souls: Gaps in the Narrative

I haven’t written anything on video games in a while – my queue of posts is slowly diminishing. Part of the reason is that I’ve been playing Dark Souls for fifty hours or so, and it’s the sort of game you really have to take your time over. Normally I’d whip through about four games in a fortnight and have something intelligent to say about at least one of them, but here I am, fifty hours later, still playing Dark Souls, and almost utterly lost for words. The key word here is ‘almost’. Last week we talked about the game’s difficulty, and this week I want to talk about how the game does story.

The description of Dark Souls as a game with a minimalist story is incorrect. Minimalism implies that the story is sparse and simple, like a mostly blank sheet of paper. Dark Souls is not a blank sheet of paper. It is a rabbit warren. There’s a valid instinct here though – what we’re really trying to say is that Dark Souls doesn’t tell its story like normal games. It’s subtle, and it withholds information, or tells it in unusual ways. Some of the difficulty results from the translation, which really seems abominable in certain places. Sen’s Fortress, for example, was called ‘The Fortress of a Thousand Traps’ in the original Japanese. That would’ve been nice to know, because it would’ve saved everyone the bother of trying to figure out who the fuck Sen is. 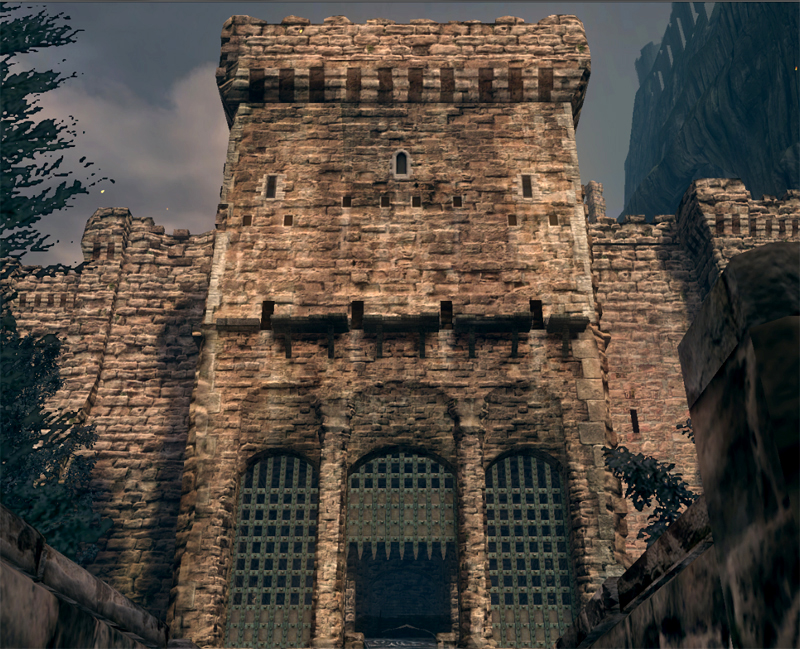 Other information survives the translation process, mostly because it’s coded into the architecture and environment. I’m currently making my way through Oolacile, in the DLC content – there’s one example where you find a prison cell, chains hanging from the ceiling. There’s a big-ass hole in the back wall that leads you into the next area. What can we tell? Well, there was a prisoner kept in this cell, and they violently escaped. Chances are it was Manus, Father of the Abyss – he’s the boss you encounter going through the hole in the wall. When we talk to an NPC, we’re told this: “Oolacile has brought the Abyss upon itself. Fooled by that toothy serpent, they upturned the grave of primeval man, and incited his ornery wrath.” So the people who used to live here found this ancient human, dug him up, and pissed him off. But if he was dead, why is he alive now? Was he the Father of the Abyss before they dug him up, or did they do something to him? You can see that there’s some general facts we can put together, from descriptions or the environment – but those facts tend to only raise more questions.

Another example: Prince Ricard. You’re running around Sen’s Fortress, and you come across this enemy knight. You kill him, and get a sword: Ricard’s Rapier. Read the description, and we’re told that Ricard is an infamous prince from another land, who went on a quest, failed, wound up dead, un-dead, and then came to Lordran, where all the undead folk are running around. Oh yeah – basically everybody here is undead. You’re undead too – that’s why when you die (and you die a lot) you respawn at a bonfire. Neat solution. So we know Ricard is a prince, but what’s he doing here? Why did he feel the need to attack us? Is he just another mindless undead? Was he trying to achieve something, or was this just where he ended up? Lots of questions, very few answers.

As a method of storytelling, I’m actually really fond of this process. It’s a way of offering resistance to the deterministic video game environment. That’s the thing about video games, right – it’s all mechanical, ones and zeros. There’s no room for ambiguity, or mystery – the whole process is systematic, logical, procedurally determined by the laws of the code. This aspect of video games is best represented by the puzzle game: something to be approached logically and mechanically, to be cooly manipulated according to one specific pattern of actions. It’s like a Rubiks Cube or something.

Given this aspect of video games, there are valid concerns that games aren’t able to fully bring emotion or mystery or ambiguity into the picture – because everything’s too deterministic. What Dark Souls gives us is one particular way of re-introducing those fluid unbound characteristics. Yes, your actions are deterministic, in the sense that you can only act according to the confines of the game, but – and this is important – it’s not always clear what you’re doing. You know the simple stuff – you’re fighting, and this is how you fight, and this is how your enemies fight, and this is how to kill them – but you don’t know why. The deterministic aspect of the game is subsumed under the uncertainty of the larger story. There are too many gaps – and you can try and figure things out, but you’re always in the murky hinterland of inference and connotation. There’s relatively little in the way of explicit stable meaning.

Essentially, when you get down to it, this is the H.P. Lovecraft approach. Lovecraft’s writing is all about scientists or researchers – kings of the objective and rational world – encountering eldritch abominations that shatter their neat little scientific realities. There’s our idea of a logical sensible world, and then there’s monsters that are so far beyond comprehension that the mere sight of them shatters our faith in rationality. To be sure, Lovecraft and Dark Souls are doing different things, but both have this model of a small set of rational mechanical knowledge overshadowed by the sheer weight of the unknown, uncertain, and incomprehensible.