Pneuma: Breath of Life (Jim, But Not As We Know It)

First things first: I do the hyphens round here, okay? All these games need to quit it with their fucking hyphenated names, because it makes it much harder to think up snappy titles. Right. Pneuma: Breath of Life is a game from last year that has a couple of entertaining things to say about consciousness and existence. I went out and bought this, The Old City, and NaissanceE in the last Steam sale, and I’m slowly working my way through them (when I’m not playing Dark Souls). Anyway, you play a character who thinks he’s a god but slowly becomes aware that you’re controlling him. At the end of the game he realises, and that’s the bit we’re going to talk about.

So once you finish all the puzzles, you go to a final linear forest where your goal is simply to walk through, open a couple of doors, and finish the game. During this level, the character reaches a full awareness of the fact that his actions are being controlled, which is super-cool. We know about actors breaking the fourth wall, and characters realising they’re characters – think Stoppard’s Rosencrantz and Guildenstern are Dead, where the pair eternally hang on the edge of recognising that they’ve done it all before and they’re trapped in an existential-horror show where they’re forced to repeat the same lines every time the play is performed. Pneuma basically completes that jump and brings the character to full awareness.

Quick bit of background: the puzzles are (mostly) organised around the motif of vision. If you look at a stylised eye, a door will open, and it will stay open for as long as you’re looking at the eye. We’re riffing on the theme of ‘the world doesn’t exist except when you’re looking at it’, which is cool (it makes Descartes happy). Anyway, there’s a couple doors you have to get through in this final level, and the character, who is aware that you’re controlling his actions, starts resisting. He refuses to look at the eye, repeatedly turning away, and you have to keep turning the mouse and massaging this unwilling character back towards it. It’s tough going – he’s an angry little bastard! It’s a cute way to express the character taking back control from the player – there’s resistance and conflict between the two. This conflict is really cool, because it makes certain rules of video games very apparent. You can’t play this game without realising the distinction between player and character – so you actually come away understanding something more about how video games work as a medium. 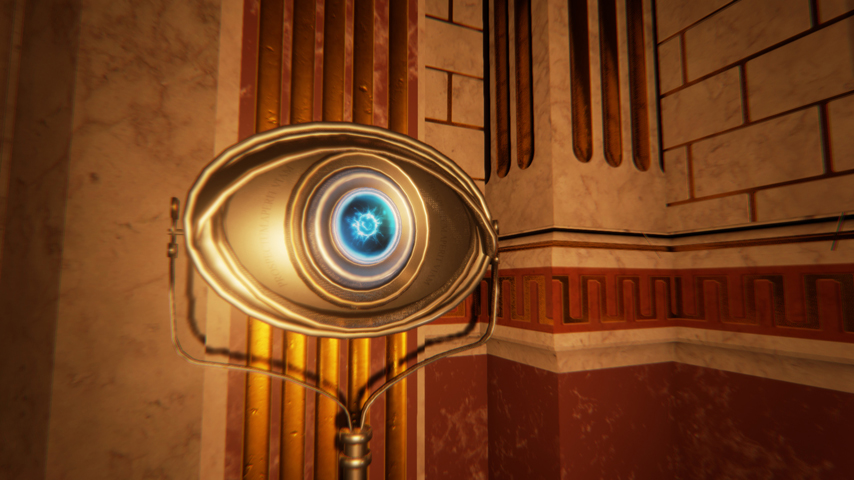 Other games have done this before – I wrote my thesis on how Spec Ops: The Line makes you distance yourself from the bat-shit crazy protagonist – but Pneuma has its own take. The key difference here is that the character actually just resists your directions – so where Spec Ops has a rail-roaded zero-choice descent into hell, Pneuma expects you to overcome the character’s resistance. It allows you to succeed at your goal, which Spec Ops does not. The point is that there’s differences between individual games, but Pneuma does fit into a general category of games that distinguish between player and character. It’s the sort of premise where there’s heaps of ongoing potential once you realise that the character doesn’t necessarily have to be the player’s bitch.

You could have a game about a military commander who’s ordering their operatives in the field – think M in the recent James Bond films. You command your agents to do this or that, and they may or may not listen to you based on whether or not they trust you – so suddenly you’ve got to manage relations between yourself and the characters as well as getting the job done. That’s cheating a little, because it still doesn’t create dissonance between yourself and the commander-character you control, but it’s introducing this idea that obedience isn’t guaranteed, that the math of the game-world doesn’t necessarily put you in a stable, controllable environment. When that lack of obedience takes place between the character and the player – that’s when the potential really kicks into gear.

Although it’s an interesting idea, it does only have so much scope. If the character wrests control from you entirely, the game’s not really a game any more – it’s just a live-render movie. At the same time, if the character’s only giving you token difficulty by shaking their head independently from time to time, is there really any serious shift in the balance of power, or is it just superficial? Is there actually any possibility of creating a deep partnership between player and character, rather than a simple hierarchy of puppet and puppeteer? Because if there’s not, then gestures towards this sort of independence are, at best, gimmicks. Pneuma has raised the question of the character’s autonomy, but they haven’t provided any answers. Stoppard’s answer in Rosencrantz and Guildenstern is that character autonomy is a myth – that tragedy is what makes up the emotional force of his play. Video games, however, have the advantage of being a different medium – so they’ve got different potentials and possibilities. Tom Stoppard wrote one script, and the characters eke out the same lines every time the play is performed. Video games, by contrast, don’t need to be so constrained. Where a play is railroaded by a script, video games can hold randomly generated environments, variable behaviours – different characters and personalities. There’s much more flexibility around the actions of a character, which means that the illusion of autonomy is much more sustainable.

That’s probably the key point to remember, actually. We are only talking about a character in a game – the best we can do is give them the illusion of autonomy. That’s enough, for our purposes here, but let’s not forget that the developers make the constraints and plan how the character can and can’t act. More on that next week.