Beyond Eyes: Navigation and Vision

I don’t normally buy the Humble Monthly crate thing – I like to know what I’m buying before I buy it. That said, last month they had Stardew Valley, so I didn’t really mind what else was in there. I picked it up, and ended up getting a game called Beyond Eyes, which follows a blind girl as she’s looking for her cat. Today, we’re going to talk about experiencing the world through the eyes of the blind (hurr hurr).

In principle I have to applaud this game, because a) it’s got no combat, and b) it focuses on a disabled girl. Both of those things are uncommon and therefore good to see. On the whole I wasn’t that impressed with the actual game, but I think it’s asking interesting questions, and sometimes that’s enough. So the basic question here is this: given that the main character is blind, how do we show the world around them? In film we often have blind characters and no particular change in the way the film is shot – I’d suggest part of that is about exploring the irony of you looking at a dude who can’t look. Video games are a bit different though, because you’ve got this character, and the world that you’re seeing is focalised through their perspective. At least, that’s how Beyond Eyes plays it.

You can see here that the girl can mostly only ‘see’ things that she’s passed by. The road she’s walking on is filled in, and so is the bird sitting on top of that gate – it’s singing, at the time, so she can hear it. So basically, everything’s whited out, unless she’s experienced it with another sense – sound, touch, etc. This is interesting, because it’s still using sight as the dominant sense – so, when the girl (Rae) figures out what she’s looking at, she visualises it in her mind and adds it to kind of a mental map. The key here is the visualising – Rae is thinking about her environment in visual terms, even though she doesn’t see.

There’s other little gimmicky attachments – sometimes Rae will misinterpret a sound, fill it in visually on the map, and then get closer and discover it’s actually not what she thought it was. A washing line turns into a scarecrow, a fallen branch turns into an umbrella – that kind of stuff. There’s this ongoing process of interpretation – changing her mental map to fit the information as more data becomes available. It’s a nice way to highlight that what you’re seeing is just what Rae imagines to be there. 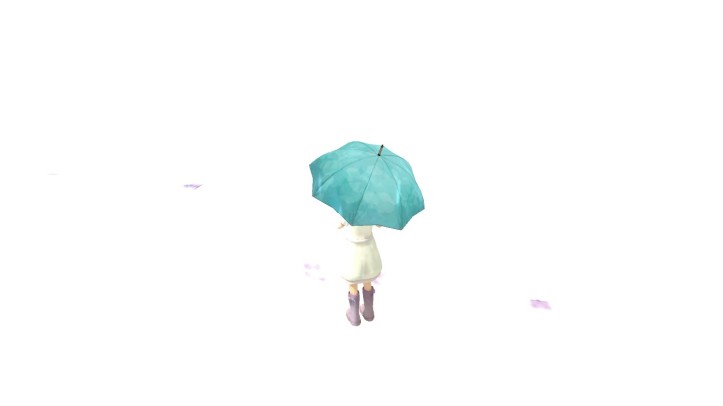 The big plus for the way this game was designed is that it makes navigating your environment difficult. You’re looking for your cat, and you don’t know where the damn thing is, because you’re blind. You don’t know which way to go either, because you’re blind. The game ends up being you stumbling around and figuring out where all the walls are, and then figuring out where the gaps in the walls are, and then going through those gaps to the next area. It’s not necessarily the experience of every blind person, but it’s a way to basically say ‘Hey, when you’re blind you can’t see where you’re supposed to be going.’ That’s a really interesting point for a video game to make, and it’s cool that this game made it.

I’m kinda wondering if there was more potential to play with the ideas though. We know Rae sometimes misinterprets what things are. It would’ve been cool to see that misinterpretation actually play into how she navigated the environment. For example, imagine she walks up to a fence, and starts trying to climb over it – but then the fence starts moving. It turns out she’s climbed on the gate, and it’s swung open with her halfway up it. It’s just a little detail that explores the tension between what Rae imagines and what the world is actually like – which is kinda what this game is about. Basically, I’m saying that the whole misinterpretation thing is cool, but it would have been interesting to see that affect more deeply the way in which Rae traversed the environment. There was potential there.

Another interesting aspect might have been surfaces. Obviously Rae was able to tell what different surfaces were by walking around – you can kinda feel when you’re on wood or cobblestone or concrete, right? But imagine, for instance, if she tripped over the curb. Rae doesn’t necessarily know it’s there, right – so actually navigating the little steps and drops that seeing people don’t think twice about can become a problem for blind people. What happens if there’s suddenly an unexpected staircase? Obviously blind folk usually have those white canes to help with surfaces etc, but Rae didn’t have one in this game for whatever reason. The main point here is that navigating the environment is hard when you’re blind, and there are aspects of that difficulty that we could invoke that might be interesting to explore, whether by playing on the tension between real and imagined environs, or by emphasising unexpected hazards. As always, I’m not saying that the game should have done these things, because it wasn’t necessarily the focus of the game – it’s just a hypothetical about how we could continue exploring this theme of blindness.

The other thing that caught my attention was the art style. It’s a little bit storybook, a little bit kid’s picture book – you know the sort, watercolours with the friendly Beatrix Potter font and all. One of the things that struck me about blindness is that there’s a lot of visual detail that vanishes – so you’re not necessarily going to know where all the branches are on a bush, or where the knots and whorls in the wood are. On the one hand we could pretend Rae is imagining all the details and move on, but on the other hand it could be really visually interesting to have a very sparse visual art style. I’m imagining something a little like Mirror’s Edge, where everything is block colours and clean-cut lines. Rather than going for the detailed friendly warm approach (which is fine, game, it’s fine, I’m just thinking out loud), you could have almost a series of heavily conceptualised environs.

Imagine a forest where all of the trees are based on one simplistic model – and it’s only when you start to explore in detail that these models are replaced with more detailed, accurate versions. It’s a way to visually represent the level of familiarity with the environment – so if you’re running quickly in a direction you’d just get crude filler trees that may or may not totally correspond to their real-life location, but if you slow down and walk over to those trees, you might figure out that they’re beech trees with low-hanging branches that you can climb up. Or maybe there’s a particular root that you’re able to safely identify, instead of tripping over it and looking like a tit. Again, just a thought. The game did what it did, and it’s fine – this is really just me thinking about how to extend the topic it broached.