I’m not sure what sparked it, but I’ve returned to Dark Souls 2. I’m heading towards the end of the game – currently playing around in one of the DLCs. I wanted to talk today about something cool it does with its environment. I’m specifically talking about Frozen Eleum Loyce, which is this big-ass castle thing that starts off frozen. It looks something like this… 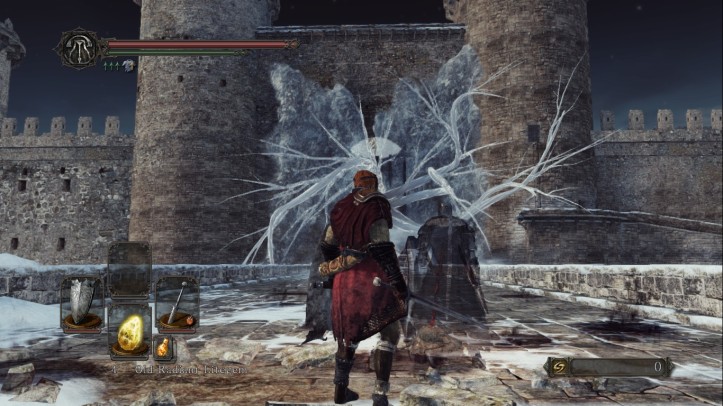 You can see there’s this chaotic sprawling ice-root bursting through the main door. Also a phantom just chilling out by the bonfire – that’s another player, in case you’re not familiar with the game. We can’t interact – there’s just ghosts that’ll appear from other players from time to time. Anyway, it’s all frozen as balls, and there’s ice and sleet and shit all flying around. Makes it hard to see once you actually get inside:

So you fight your way through a few areas, and eventually you meet a princess and she switches off the snow-machine for you because she’s a dear. What’s interesting is that now the whole castle has changed – where before certain things were blocked off by snow, suddenly you’re able to access those areas. The ice has gone, the snow’s gone – it’s a whole new world. We might call it a dynamic environment – really it’s just a fancy way of saying the one location changes. 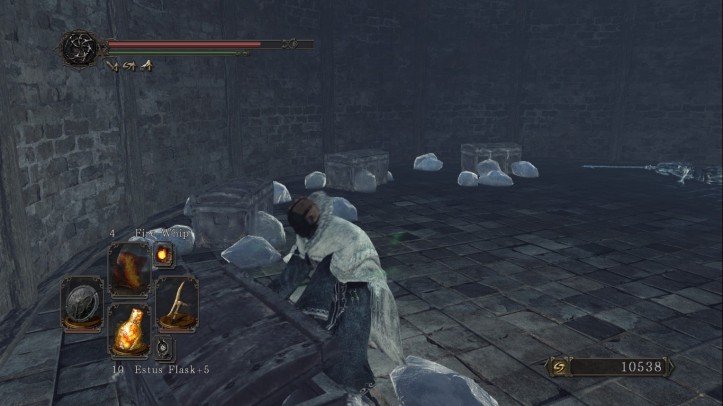 As a point of comparison, we might think of something like Metroid, where you have to get certain keys to unlock certain doors at certain times – basically it’s one area that funnels you from place to place by only allowing you to access different parts at different times. Heaps of games do a similar thing – they’re technically open-world (or something that looks kinda open-world), but they really have a very strict linear progression. The whole door-unlocky thing is kind of what’s happening here, in the sense that now these new areas are ‘unlocked’, but there’s more to it than that.

One of the other significant changes is in strategy. In the image above, you can see these two massive icicles (left and right), and a couple dudes on either side of the fountain. There’s also an extra dude hiding behind each icicle, so there’s four in there total. You can kinda sneak up around the icicle on the right and lure the dudes in there round to you – basically you want to isolate the dudes so you can murder them individually. Fighting against packs is not something you want to do in Dark Souls. Anyway, the icicles offer a convenient point of protection from the dude under the bridge – you’re busy murdering the guys on the right, and he can’t shoot his ice-phallus at you because there’s a massive thing in the way. However, when everything melts… 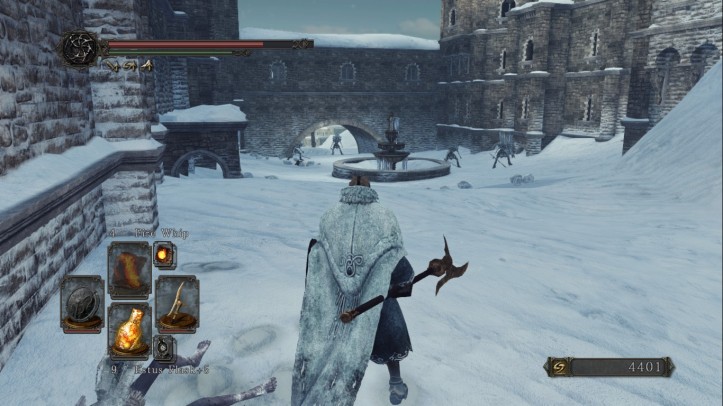 You have to take on a whole new strategy. There’s no icicles to hide behind, so your strategy for the area has to change. That’s dynamic environment. At first I thought it’d be a bit bullshit having to replay the area a second time to loot all the previously frozen chests, but this change in how you approach the area keeps things interesting for long enough to scoot you through. It’s also visually quite different, because of the lack of blizzard – I think that probably contributes something to the novelty of the replay.

There’s other similar level design tricks in DS1 – you have to de-flood New Londo, and that sort of changes things. It’s more in line with the unlocky trick I mentioned before though – it’s not necessarily so much changing an environment as unlocking a previously obstructed second section. DS2 has new sections that’re unlocked, but it also changes the initial section significantly enough to make it interesting all over again. Compare this screenshot with the second from the top:

Same location, strikingly different vista. Suddenly there’s a big-ass castle to gaggle at. There’s plenty else to see as well – the whole area is suddenly opened up:

As a quick coda, another game which does a similar sort of thing is the Arkham series. I’ll focus on Arkham City, because it’s the one I’m most familiar with. Basically the game starts off with only a few thugs working for each super-criminal – there’s heaps of un-aligned orange jumpsuits running around. As the game progresses, they become less frequent as everybody either picks a gang or gets murdered (yes, by the gangs). There’s also an increase in weapons, more bombs, more traps – so there’s the strategic change as well as the visual difference as everybody joins a team. There’s also patterns of over-writing: Penguin’s gangsters get captured by Joker’s thugs and switch teams – so they put clown masks on over their Penguin khakis. You’ve actually got the personal history & development of the thug represented in their clothes. It’s cool shit.

Probably the big difference between Arkham City and Dark Souls is that AC is bigger on the vignettes. For example, the capture I referred to earlier is something you interrupt – you’re crawling through a vent underneath this scene while it’s happening. Eventually you jump out and beat everybody up (surprise, it’s Batman!). Some of these vignettes are scripted, but others you just stumble across while you’re wandering around the city. Rival gangs shit-talking each other from opposite roofs, lone criminals found hiding on somebody else’s turf – it’s really lively. Dark Souls tends to be more understated, more indirect. Occasionally you come across people who seem like they’re genuinely living their lives, but (partly for thematic reasons) there’s lots of people waiting around, people imprisoned, people being lonely and isolated – it’s a more muted tone than Batman. In musical terms, if Dark Souls is this:

Then Arkham City is this: