I recently picked up the Humble Freedom Bundle – something like 40+ games, with 100% of the proceeds going to charity. Specifically the ACLU & related groups in the States, because, uh, they’ve got an ape for a President. Anyway, expect to be seeing a bunch of those games popping up here now. One of them is Ninja Pizza Girl, which I sort of expected to be a throw-away piece of junk. It sounded gimmicky and worn, a sort of desperate mashing together of ideas in the hope of coming up with something original. The final product, well, it went in a direction I wasn’t entirely expecting.

So basically you’re delivering pizza, and there’s a bunch of enemies, and you have to platform around and dodge the baddies etc. The better you do, the more intense the colours get – it’s a little like BIT.TRIP RUNNER in that sense. What was interesting was the focus on bullying. The enemies don’t hurt you, per se – they push you over and laugh at you. So you don’t have health, necessarily, you have embarrassment. If you’re too embarrassed because you’ve been pushed over too many times, you sort of crouch down and have a wee sob, and then you have to quick-time yourself back to self-esteem. That’s kinda cool – you’re feeling down, and then you slowly stand back up and go ‘Nah, fuck you guys! I think I’m great.’ You don’t actually say that, but it’s something along those lines.

So the game’s about bullying, in that sense. Functionally this mechanic is really just health – it’s a thing that runs out and then you have to stop playing. Well, technically you can still get back up, but the timer’s still running while all this is happening, and you end up losing a not insignificant amount of time. My point is that it’s probably best understood as a sort of aesthetic sheath for a pre-existing idea. Which is fine, don’t get me wrong. It’s not a mechanical innovation, but thematically it’s an interesting way to present it. It incorporates self-esteem within the rules of the actual game.

Self-esteem relates to several other aspects of the game too – you can see in the picture above, it’s all gray-scale and dark and gloomy. That’s a visual representation of how healthy you’re feeling. It’s technically still a mechanic, I guess, that sort of abstract representation of health, but it’s interesting that it affects primarily the visual parts of the game. Here’s a picture of a very excited high-health protagonist for contrast:

However, if you think about it, there are some aspects which are a little bit odd. The protagonist only feels good about herself when she’s performing well? I know it’s a game, but if you follow the logic of the metaphor, these are the subtleties that come out of it. According to the internal logic of the game, feeling good is associated with good performance. I wonder what that says to kids who aren’t performing well – it would seem like the mechanics of the game don’t really give them any reason to feel good about themselves.

Let’s not jump to any conclusions though – I’m not saying the game out and out tells you that unsuccessful people should feel bad. That’s not supported by the narrative level. On a strictly narrative level, the girl and her family run a pizza business that exists on the margins, squeaking by in a culture of mega corporations and big business. Financial success certainly isn’t equated with happiness. So I’m not saying the game explicitly tells less successful kids that they’re failures – I’m just noting an ambiguity in the gameplay mechanics that grates against the ostensible narrative. 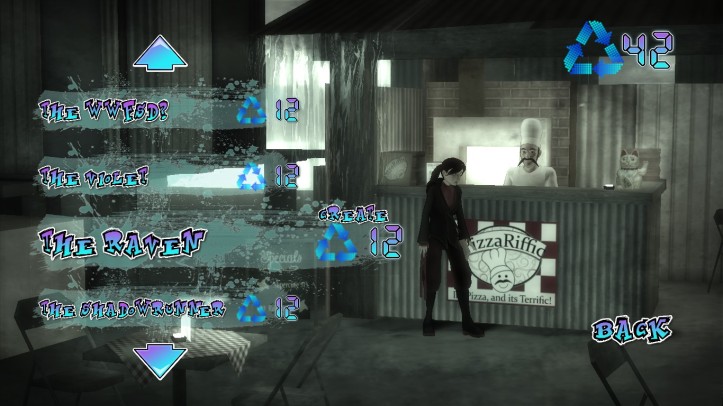 There’s also a slightly weird resonance in that when you’re feeling bad, y0u can make yourself feel better by going and buying new clothes. In the top image, you can see the girl feeling pretty down. In the image below, I spend the points, unlock a new outfit, and – bam! Feeling better. You could argue that it’s not about spending money so much as creating new expressions of identity, or the experience of recycling to get new outfits – again, I’m not saying anything straightforward or overly simple. I’m just noting this weird resonance – you feel bad, you ‘spend’ what is functionally a sort of currency, and you get new stuff and feel better. It’s not that the game is blaring consumerism – but it is a bit weird.

So Ninja Pizza Girl is an interesting little game. The narrative arc and themes are really unique, if occasionally verging on the slightly condescending. It’s cool that there’s a female lead, because statistically that’s less common, and it’s cool that there’s a bunch of themes around self-esteem and shame being explored. Some of the more subtle implications of the game don’t always support the main theme, to my mind, but by and large it’s a pretty interesting idea.

There’s a bit of background on the game here, if you’re interested.