Shadow of Mordor: The Nemesis System

So I’ve been talking about Shadow of Mordor lately, and I said I wanted to go back and look over the Nemesis system in more detail. It’s super cool, and I do enjoy parts of it, but there are also parts where it potentially works against itself. There’s also generally some broader issues with how the system is integrated into the game – I don’t want to talk about that too much, because I want to treat the system in relative isolation, but we’ll spend a little bit of time on it, even just as context to get us started.

When we last talked about Shadow of Mordor, I suggested it was a bit thin in terms of things to actually do. By way of comparison, I’ve just started playing Assassin’s Creed: Unity, and here’s a quick screenshot to give you an idea of the sheer density of things. So that’s very early in the game – I’ve just revealed one area with the sync point, and that’s everything that I can immediately go and access. I don’t know if I necessarily like Unity, but it’s sure fucking dense – and within that, it’s also visually gorgeous. You’re running round Paris, not a bunch of mud huts and a couple tents.

While making that initial argument I set aside the Nemesis system, which is arguably where the real meat of the gameplay exists. If you’re not familiar with the system, basically the idea is that there’s a bunch of Orc captains, and they have a hierarchy and relationships and they change and evolve over time. If you set an Orc on fire and he escapes, he’ll come back later with a fear of fire. If an Orc kills you, he’ll grow more powerful and he’ll remember you when you fight him again. This sounds cool, by the way, but in practice he just says something like ‘Oh I’ll kill you again then’ and that’s about it. Some developments are more meaningful than others.

So the Nemesis system introduces a bunch of individuality and uniqueness into your game. Each Orc is different, and they have their own little perks and quirks. They develop as characters as you proceed through the game. And this is sort of where the trouble begins. I mentioned last time that the game’s plot is quite thin. The game is split into two regions, and in the first region, the major story goal is killing the five warchiefs (those top-row fuckers). Let’s start with that.

So obviously the Orcs are all individual and that’s really cool. However, there are limitations to the idea. There’s a very clear pool of traits, and characteristics are only going to come from within that pool. Personally, I get to the stage where any given Orc captain exists not as an individual but as a permutation. These Orcs are unique in the way that a hand of cards is unique. When you get a hand of cards, technically there’s no other combination quite like it, but also it’s probably not that new or surprising. Anyway – so the Orcs aren’t really that unique, but also the unique-ness that they do have is kinda undersold, because your job is to kill them as quickly as possible. The best players will get the least out of the Nemesis system. This is especially true in terms of character development – how is an Orc supposed to come back with a new-found fear of fire if you stuck a sword through his face the first time you met him? To some extent the evolution of characters is dependent on you either a) letting them escape or b) dying. That is, it’s dependent on you fucking something up. 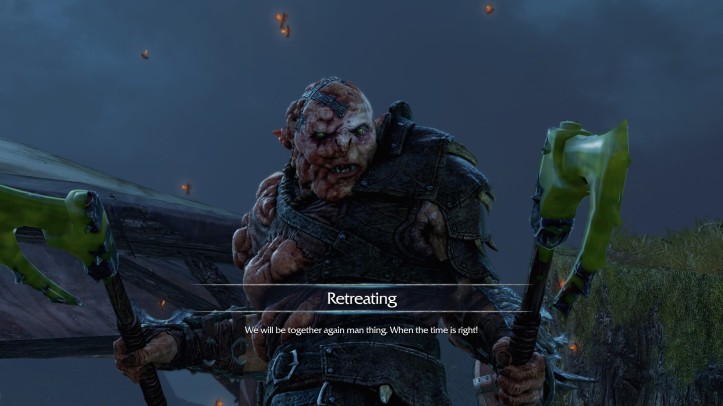 I say ‘to some extent’ here because it’s a generalization. It’s a noticeable trend, I think, but it’s certainly not true in all cases. Let’s turn to the game’s second region. I said above that your goal in the first half is to kill the five Warchiefs. In the second half, you have to brand another five. Branding is a really great feature in the Nemesis system – basically, it’s when you brainwash Orcs into working for you. You can send them on missions to kill enemy Orc captains, or to backstab their superiors, or any of this kind of thing. You can show up to save them if they get into danger, and because they’re just out roaming the world, sometimes they might randomly show up for you too.

So branding is a great feature, and it lets you develop Orcs into more long-term characters. There’s not the same kill-on-sight approach. Does my point only apply to the first half of the game then? Not quite. Firstly, as an aside, I’d like to point out that only having the branding ability in the second half of the game makes the first half of the game fucking suck in retrospect. It’s weird that they wait until literally the halfway mark to give you such a central ability. Secondly, the second region also introduces some other exceptions into the basic argument. For example, Warchiefs all have bodyguards taken from the wider Orc population. You can kill those bodyguards before fighting the Warchief, and it makes that fight easier. However, sometimes the bodyguards will magically survive being murdered and turn up to the Warchief fight with a more developed character. So that’s an example of character development that doesn’t depend on you fucking up.

So branding means you don’t have to kill the Orcs, and that gives them a bit more chance to develop through fighting other enemy Orcs and so on. Sometimes they’ll fail and die on those missions, and that’s partly your fault for not showing up and helping them. That’s all cool. But there’s a point where you’ve brainwashed 90% of the Orc captains, and there’s just… not really much legitimate conflict any more. The Nemesis system originally revolved around Orcs infighting just as much as it revolved around you sneaking up and murdering them. But Orcs that are brainwashed don’t fight internally. They’ll get into fights with the non-brainwashed Orcs, but once you kinda hit that critical mass of brainwashery, everything kinda grinds to a halt. There’s not all that much change generated by the interpersonal mechanics of the Orcs any more. In a sense, you’ve just about brought the entire Nemesis system to a screeching halt.

There is a sweet spot, I suggest, when you’ve just begun branding – when you’ve got more than, say, 10% of the Orc captains on board, but less than maybe 30%. There’s 20 Orc Captain slots in total, and 5 Warchiefs – so let’s say you own between 2 and 7 captains. Within this window, your Orcs are a precious commodity. You want to protect them because they’re so few. You might be more familiar with their characters – again, because you’ve only rolled through a couple. But when you’ve got 15 of the 20 captains under your control? You don’t care if one or two get picked off by a rogue enemy Orc. They become less important as individuals and more like just a huge unwieldy mass.

So that’s my basic argument. The Nemesis system is cool, but the first half undersells development by encouraging you to kill everything as quickly and efficiently as possible, and the second half undersells individuality and arguably a large chunk of the dynamism of the Nemesis system by letting you control all the Orcs and stop them infighting. They’ll still have some actions like feasting and monster hunts to demonstrate their bravado, but these aren’t interpersonal conflicts – executions and ambushes and duels all fade into the background.

I’m running over time again, sorry – one last point. Possible solutions to these issues? Make the Orc captains more difficult. If it’s a slog to kill a captain, it’s more rewarding. If they’re dangerous and they fuck you up heaps, they develop more, and if they’re better at getting away, there’s more chance for them coming back. As it is currently, you can get a power to shoot orcs in the legs and pin them to the ground – so it’s kinda hard for the captains to actually legitimately get away. I think I’ve had two escapes total, in my current (nearly finished 20-ish hour) playthrough. Mostly it’s pretty easy to chase them down and murder them. Harder fights won’t necessarily solve the branding issue in the second half, but it might spin the game out a bit longer, especially with the sometimes-resurrecting bodyguards and so on. It’ll mean that the branded Orcs you do have will carry more weight in the fight against Warchiefs who accidentally arrive with six bodyguards in tow or whatever, rather than being so much disposable trash. It’s not a fully worked out solution – I’m just spitballing, really. But I’m also well over my word limit, so I’ll leave the conversation there.