As of writing, post #199 has just been released, ah, two hours ago. #200 comes out on Wednesday – it’s not the 200th one that I’ve written, because, as I’ve explained before, the two streams (video games & theology) are often a couple weeks ahead or behind each other at any given time. Anyway, I started looking back over the catalogue, and realised I had more to say about Portal 2. I wrote about it waaaay back in 2016, and you can find the article here. Today we’re going in a totally different direction.

One of the first video game articles I ever read was this one, on the original Portal as a work of art. Game Studies has some great content, broadly speaking, so if you’ve never seen it before, take a look. The basic premise is that Portal is, in a sense, the fundamental game about games. I’ve written recently about how there’s a difference between the basic surface-level story and any deeper themes or commentary that’s being put forward. Portal spends a lot of time commenting on what games are and how they work, alongside the more superficial narrative about Chell trying to escape from the clutches of GLaDOS. 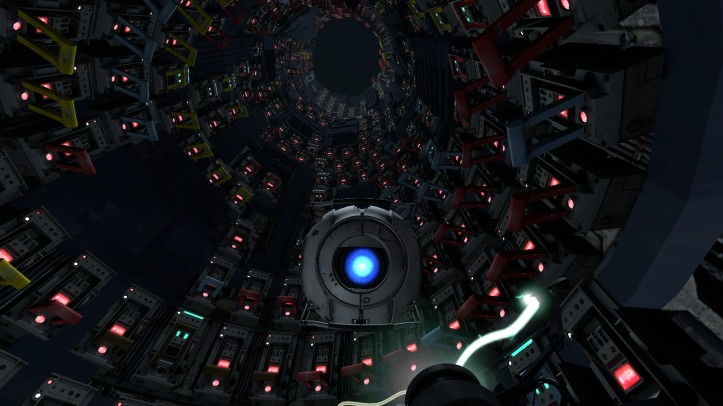 I’ll briefly skim over some of the main points of the article. In Portal, on a fictional level, you have to move through a succession of spaces, completing tasks in each space before being allowed into the next one. That’s the fiction, but also very crudely the structure of video games in general. Similarly, you’re playing a game with a bunch of rules and contexts laid out by the computer program – in Portal, that program is given a name and a personality in GLaDOS. You do what the computer tells you to do. There’s some interplay between the ideas of ‘doing what you’re told’ and ‘being disobedient’, in that you can use your portal gun to shoot cameras off walls (usually receiving some snarky dialogue from GLaDOS in return). More importantly, you also have to jump off the rails and save yourself from being dropped into fire and killed in the late game. In a sense, then, Portal is already playing with the themes that are more fully developed in something like The Stanley Parable. It’s funny to pretend that you’re breaking the rules of the game by ‘disobeying’ what the computer tells you to do, but ultimately you’re still operating within the confines of the game and your supposed freedom is a lie. At the end, of course, you overcome the challenges set for you by the computer, and you’re freed from the game in the same way that Chell is freed from the facility.

On a very basic level, then, Portal is metafiction, a game about games. It’s also, almost by definition, a one-time thing. It’s got a point, but that point is relatively self-contained, and once it’s been made, you can’t really make other games that say the same thing – they’ll just be Portal imitators. We might equally note that there haven’t really been a lot of imitators of The Stanley Parable – once it’s made, that’s it. The point’s made, and it’s really a one-time thing. So with all of that said: what the fuck is left for Portal 2?

Strictly speaking, nothing. And I think Portal 2 knows this. It doesn’t go as far in terms of meta-commentary, although what it does have to say is still kinda interesting just within itself. The game starts off a long time after the conclusion of Portal. Everything’s overgrown and worn down and just kinda trashed. You start off in basically the same room as in the original, except there’s foliage running around everywhere – you can see it in the shot above. It recreates the famous shot from the original Portal where players see themselves exiting the cube. All of the greenery and so on kinda provides its own metacommentary: the game basically says ‘Look, we’ve been here before. We all know what this game is. We’re revisiting something we’ve done before and it’s a bit old and stale and definitely not as lively as the original.’ The Aperture Science lab is out of business, but here we are as players running around its carcass. 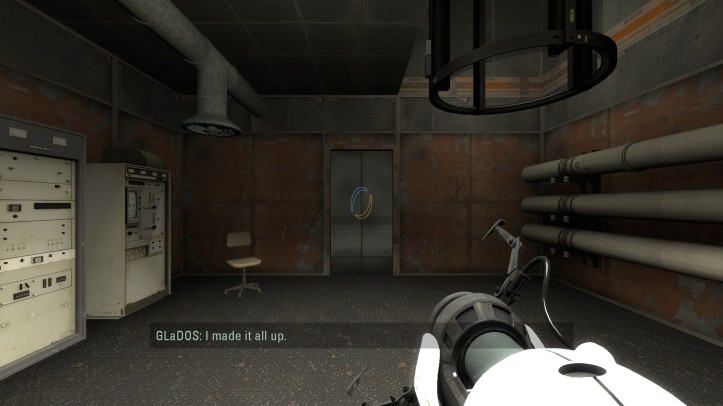 So the game spends most of its time looking backwards. We’re living in a post-Portal world, and that’s especially true for Portal 2. But rather than trying to avoid that fact, Portal 2 leans into it, and makes the past its main concern. It starts unpacking the history of Aperture and Cave Johnson, and the backstory of GLaDOS/Caroline. There are even mean little jokes – GLaDOS tells you that she’s going to introduce you to your parents, before revealing that – obviously – she doesn’t have them and they supposedly don’t want to see you. It’s a throwaway joke, but it’s still themed around this idea of the past. And then you go down in the lift, down to the base of the Aperture enterprise, down into the bowels of history, and start to work your way back up to the present day. And that’s really… it. It’s not a bad game, again, but the point I’m making is that the meta-commentary only goes so far. Portal 2 recognises that it’s bound to its past, and it leans into that fact, but it doesn’t have anything interesting to say about why the past matters or what it’s like being tied to such a successful first game.

One last thing though – the game also pulls out Wheatley, who’s a great comic character that actually serves the basic meta-structure of the game. The premise of Wheatley is that he’s a fucking idiot, right – he doesn’t know anything. There’s a bit early on where he’s talking about GLaDOS, and he says something like “You wouldn’t believe who killed her. A human! I know!” It’s ironic, right – Wheatley doesn’t realise that he’s describing a murder to the person who did it. The joke is that we know way more about what’s going on than he does. Similarly later on Wheatley talks to you in an accent because he thinks GLaDOS can’t hear people speaking in that accent. It’s an awful, stupid idea, and as it’s happening we all know that GLaDOS can hear him – so again the joke revolves around the difference between knowing and not knowing. Thematically, that difference plays into the game’s focus on history. We’ve all played Portal before, and we all know about the cake. We all know who killed GLaDOS. We all know all the details, and the joke about Wheatley is that he’s a character in a massive hyper-famous series who doesn’t know anything about anything. But again – does it mean anything? Not really. It’s coherent with the overall theme of the game, but there’s no real message – nothing’s being said. That’s really the broad issue throughout Portal 2.