Wolfenstein The New Order: On Bodies

I’ve got a big long article about Wolfenstein 2 in my drafts. It’s been there for over eight months, and it’s 6000+ words. When I first played Wolfy 2, I was really struck by it – as evidenced by the absurdly long article! But I haven’t finished the work, and I need to get back on track, so we’re going to spend a few weeks dealing with Wolfenstein. I actually want to start with Wolfenstein: The New Order, which was the beginning of our current iteration of the Wolfenstein franchise. The New Order is, in a word, fantastic. Just utterly wonderful. We’re going to go through and spend some time talking about why I think it’s so fantastic, because a lot of the issues that come up in that game continue to be super relevant in The New Colossus, aka Wolfenstein 2.

I’ve written a little bit on Wolfy 2 before, namely over here where I talked about the bomb and alt-history. Actually, funny story, I’ve started playing through New Order again for these essays, and the grandparents on the farm in Poland talk very directly about the nuke. It’s a throwaway line that gets developed out in New Colossus. Anyway, I thought I’d written on The New Order – I’ve spent heaps of time talking about it with friends, and just generally thinking about it, so imagine my surprise when I realised there was nothing here!

So: game plan. I want to go through New Colossus level by level and explore some of the themes that come up. I’m not entirely sure if I’ll do the same for New Order – I think what I’ll do is play through it and talk about themes in a chronological as-experienced sort of order. We’ll see how that goes. 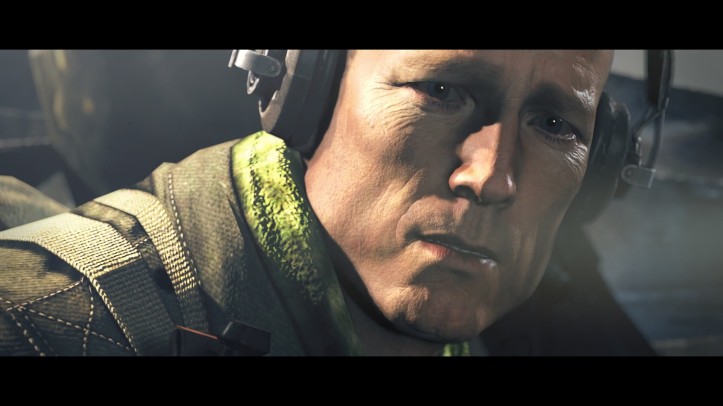 The first level of New Order is set in 1946 – you’re busy trying to kill General Deathshead, who’s been hanging around since Return to Castle Wolfenstein as a major antagonist. Most of the level takes place in a big old castle kinda thing, which to me reads again like an extended homage to those older Castle Wolfenstein type games. Probably the first major theme that pops up for me is the Nazi obsession with the body. Obviously we’ve got the idea of the Aryan form – blond hair, blue eyes, and so on. The protagonist, BJ Blazkowicz (pictured above), is the quintessential Aryan figure. And I mean look at him – he’s square-jawed, blond, blue eyes – he’s such a typical action-film protagonist.

As I explored in my earlier piece on Wolfenstein 2, BJ’s body is an ambiguous site. He looks Aryan – and let’s be really explicit about what that means. BJ, the hero of the game, is a physical manifestation of Nazi ideals. That’s fucking uncomfortable. At the same time, of course, he’s the hero of the resistance, the all-American soldier. He’s also Jewish – although I think that’s only really introduced as a plot element in W2. I don’t think it exists in New Order as canon. Probably the strongest thing we can say is that New Order repeatedly positions BJ alongside marginalised groups such as Jews or the mentally disabled in order to identify him and his actions with those groups. You spend time in a mental institution, you spend time in a prison, you get left in a giant room-sized incinerator that 100% is meant to evoke the gas chambers. And then you get out and kill all the Nazi motherfuckers. 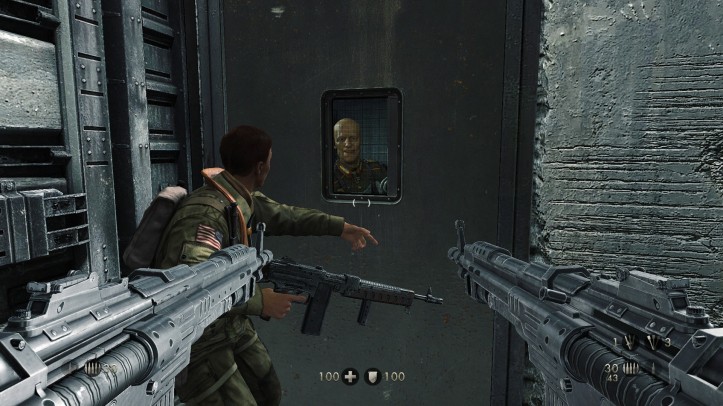 So BJ’s body is sort of an uncomfortable site. It’s a body lauded by Nazi ideology, but also a body used for killing Nazis. The theme of the body plays out in a bunch of other ways too – note that in one way or another, most of the Nazi villains in New Order have some sort of physical deformity. Deathshead is all scarred and looks like – well, looks like death, really. Frau Engel gets her skull crushed and ends up with really extensive facial damage, and her lover, Bubi, is a super effeminate young man. Oh – ah, sorry, I should clarify – I don’t think that being effeminate is a type of deformity. But the point is that New Order signifies that the Nazis are evil by giving them these physical traits that are used to symbolize or connote a sense of deviancy. Deathshead is scarred, right, he’s ugly, and ugly means evil. Similarly, Bubi is just another example in a long line of effeminate male villains. We have this tradition in literature and film where feminine traits in a male character are used to signify deviancy, or just plain evil-ness. Look at Ratigan in Basil the Great Mouse Detective, or Xerxes in 300. Xerxes is minorly complicated, because he’s obviously all buff and shit too, but look at all that gold shit all over him. He’s got nose-rings and earrings and this weird head-necklace thing going on, and he’s all up in gold because he’s not actually a fighter, he just likes to look pretty, and he’s got his eyeliner on point and his eyebrows pencilled in, he’s got no body hair (in comparison to the hairy bearded Gerard Butler), and – yeah no he’s femmed up. Look at how touchy feely he gets near the two minute mark, with his long painted nails. FEMME AF.

Actually, 300 also illustrates the broader point about ‘deformity = evil’ with Ephialtes, who’s the Greek with the hunched back and a bunch of other physical deformities. Of course he betrays the Greeks – he’s deformed, and that’s code for evil. Does that seem shitty and unfair? Well, yes, obviously. And that’s kinda what’s weird about New Order (fuck yeah look at that segue back on track). On the one hand, it’s undermining Nazi ideology by having the Aryan figure kill the shit out of all the Nazis. On the other hand, it spends ages playing out those exact same tropes of the evil degenerate or the evil deformed character. Fuck, even before Engel gets her head crushed, she’s a sexually aggressive cougar. When you’re on the train with Bubi and her, she grabs his hand after the card game and very deliberately puts it between her legs. It’s meant to be repulsive – it’s another example of how the Nazis are coded as evil perverts and degenerates and the rest of it. And again – if you actually think about it, there’s nothing necessarily wrong with a sexually empowered older woman. It’s kinda shitty and awful to portray older women as monsters for being sexually empowered. But that’s what New Order does. 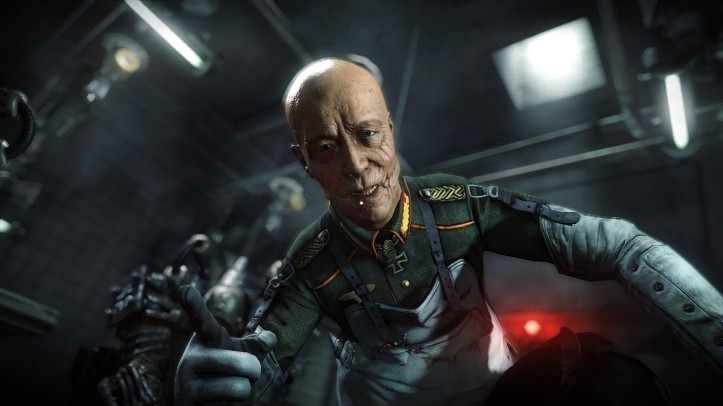 So the Nazis have awful ideals, but also you’re playing as a character who embodies their ideals. Most crucially, the game also codes the Nazis according to the ideals that it condemns the Nazis for having. So what’s the message? I think part of it’s about undermining the Nazi ideology. The game subverts the Aryan figure by giving an Aryan-looking character a really successful career in killing Nazis. At the same time, I personally kinda suspect that New Order is pointing out some overlap between Nazi ideology and – dare I say it – contemporary ideas of deviancy and heroism, especially in the context of the first person shooter. BJ looks like an Aryan, sure, but he also looks a fuck of a lot like every other video game protagonist. To me, that’s a criticism of the genre, or the wider medium. What does it say about our culture that an Aryan figure fits in so neatly as a video game hero?

Similarly, the Nazis are coded as deformed or perverted, but didn’t the Nazis also use that same type of coding? When Deathshead has you all tied up on the floor, he looks at the two potential sidekicks – Wyatt and Fergus – and says that he likes their eyes. There’s a third soldier, called ‘Head Wound’ by Fergus, who’s lost one of his eyes. Deathshead looks at him, smells his head, and goes “Not this one. Somebody broke it already.” Head Wound is deformed, he’s lost an eye, and so he’s not good enough for Deathshead. He’s impure. He’s a useless specimen. Physical deformity doesn’t usually signify uselessness in our media, but it definitely carries negative connotations. Like I said above, most commonly, deformity is code for evil. Think about it – Freddy Krueger has his iconic burns, Vader and Palpatine both have extensive facial scarring, Javier Bardem’s character in Skyfall has his face all melted and deformed, Dr Poison in Wonder Woman – honestly I could go on forever. On the flip side, BJ is handsome and rugged, and therefore heroic and brave and good. And coding isn’t necessarily bad, right – I don’t think New Order wants us to eliminate coding altogether. But we see the Nazis do it a bunch, and then the game also does it a bunch, and subsequently the game kinda ends up feeling uncomfortable. It draws attention to the wider patterns of coding across video games and beyond, and – for me, at least – troubles the idea of coding without necessarily saying we should reject it altogether.