Well, I’m not sure how this is going to go, but let’s give it a whirl. I’ve mentioned before that my video games queue is currently set up until August – I’ve gone through the Wolfenstein games over the summer break, and now, uh, I guess I’ve accidentally queued eight months’ worth of articles. So I’ll have a bit of extra time around the blog going forwards, and I’ve decided to spend that time starting up a third stream of posts. I’ll explain the process below, and then get into my pilot entry, on Wellington’s St Mary of the Angels.

Some of you might know that one of my research interests is in video game space. I’m hoping to start my PhD on the topic midway through this year. Of course, one of the big issues is that I don’t really have any formal training in any sort of spatially-related fields. I’m an English Literature major, not an architect or a builder or anything like that. I’ve been quietly trying to upskill in the background, but frankly there’s a lot to learn. So I’ve decided to spend this extra time on articles detailing and exploring local architecture. Each week I’ll put up a different building, including its history, comments on the architecture or engineering – it’s just an opportunity to try and use the language of buildings more consciously. I want to try and shake up how I approach these articles too, so some weeks I might be able to find floor plans or blueprints and talk a little about those. It’ll all be thoroughly amateur stuff, and I apologise in advance for all of the gaping problems that will no doubt resurface in twenty or thirty years.

So partly these articles are about getting more comfortable talking about buildings. But also, we’re currently mid-move to Melbourne. I’ve previously been living in Dunedin, but we’re moving to Melbourne for work and the PhD. These articles will be a great chance for me to explore the city, get to know it a bit, and share some of my adventures around the place. I’ve also also got a new play in the works, and it’s possibly going to be about Melbourne as a city, so these posts will equally serve as research for that. Anyway, this week we’ve stopped off in Wellington, and I’ve been taking some photos of different buildings, just trying to get used to my phone camera. Today I went through St Mary of the Angels, a Catholic church in Wellington central, and I’m pretty happy with how the photos came out. So, as something of a test drive, here’s a look at St Mary of the Angels. 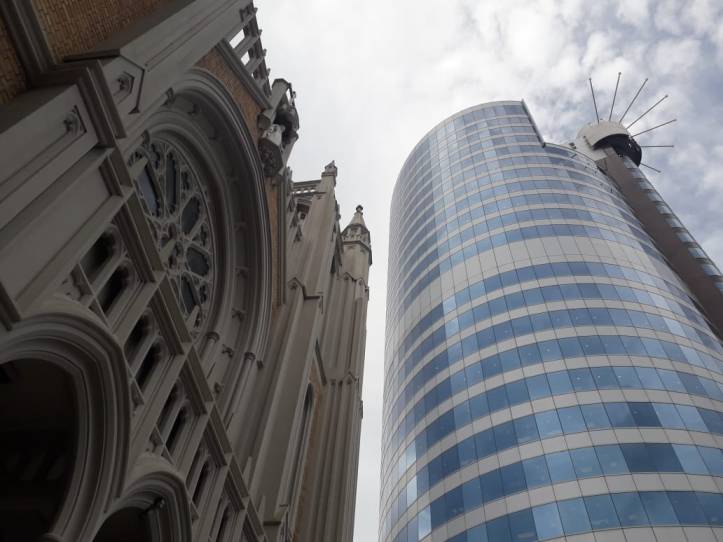 St Mary of the Angels is a Catholic church in Wellington, New Zealand. It’s at 17 Boulcott St, in the centre of town, and just around the corner from where we’re staying. It seems to be in a bit of a weird location, kinda tucked away off the main street and away from the crowds – but then the same could be said of St Joseph’s Cathedral in Dunedin. I don’t know if the Catholics are the victims of historical circumstance or bad planning, but they always seem to have their churches end up in slightly odd locations. Really this one is just a historical accident, as the Catholics have had a church more or less on the same spot since 1843. At that time, the location would’ve been only a couple hundred metres from the water, which lapped against what is now Mercer and Wakefield Streets, as well as, obviously, Lambton Quay. Over time, the city has reclaimed 155 hectares of land, and the church has been jostled away from the water and into the background.

The original chapel, built in 1843, was demolished to make way for a large wooden church in 1874. This wooden church was called St Mary of the Angels, after the Basilica of Saint Mary of the Angels in Assisi, Italy, where Francis of Assisi received his calling. Despite the auspicious namesake, our wooden church burnt down in 1918. A new church was started in 1919, under the guidance of renowned New Zealand architect Frederick de Jersey Clere. Clere is a famous church architect, although notably he was the official architect for the Anglicans, not the Catholics. That may not seem like a very important detail, but things were a bit more heated between denominations at that stage, with a couple of local Catholic architects even taking the church’s priest to court to try and have the decision overturned.

Clere enjoyed building with reinforced concrete, and in fact built St Mary with it. You can see the facade in the picture below – it’s concrete, rather than bricks, which is why it’s got that lovely smooth finish. It’s also very neo-Gothic. Traditionally, the three hallmarks of Gothic architecture are the pointed arch, the flying buttress, and the ribbed vault. The pointed arch concentrates pressure on the single point at the top of the arch – it’s essentially like two walls falling over against each other, right. That design means there’s a lot more lateral pressure, which was historically offset by the flying buttresses. But in this church, they’re working with concrete, which doesn’t need the additional support. So no flying buttresses here. Just spikes and towers and parapets and all the other striking visual elements of Gothic architecture.

As of 1984, St Mary of the Angels is ranked under category one on the Historic Places Trust. There’s only two categories: Category 1, for “places of special or outstanding historical or cultural heritage significance or value,” and Category 2, for places that are significant without being special or outstanding. More recently, in the last couple of months there was a furore after sexual abuse survivors tied ribbons to the church’s fence. It transpires that the parish priest cut the ribbons off, not realising what they were, and the protestors took offence. The priest quickly recognised his mistake, invited the protestors back, and tied some extra ribbons up himself. He makes a couple of passing comments about it in the parish newspaper in December, and you can feel a slight defensiveness:

“The ‘ribbon incident’ on the fence highlighted the pain by some in society who are survivors of abuse by a small number of priests and religious.” [sic]

There’s an almost indecent haste to remind everyone that it’s just a small number of priests being awful. It’s only a couple – just a few, plus all of the wider institutional structures of authority that went into covering up the events and scaring people into silence. But it’s just a small number of priests, really. I also find the whole ‘by some in society’ thing a little bit degrading – I might be reading too much into it, but to me it just comes across again as trying to minimise the figures or the damage that’s been done. It’s not a comment on the widespread damage done by the Catholic church, or the seriously compromised credibility on, uh, basically any moral point about anything. It’s just, well, there’s some people who got hurt by a very small number of priests (really tiny), and those guys are sad and it’s a real shame. I dunno – that’s just how it reads, anyway. It’s probably also worth noting, in the interests of fairness, that one of the main tabs on the Catholic Wellington Diocese page is about confronting abuse from within the church – so maybe there’s some hope. Further, as fate would have it, this ribbons-on-the-fence style of protest originated in Melbourne, so we might have a future article looking at some of those early events. We’ll see what happens. In the meantime, thanks for trying out this foray into discussing architecture, and I’ll dig up something in Melbourne for next week.