One of the big things about Wolfenstein is a really clear division between different types of material. Essentially, at its crudest, it’s a split between the mechanical and the natural. That’s a fucking awful distinction, and we’re going to try and nut out something a bit better, but really crudely that’s the sort of thing we’re going for. Think the Orcs in Middle Earth vs the hobbit lifestyle – that’s the kind of thing we’re moving towards, except instead of hobbits it’s the classic all-American BBQ and white picket fence lifestyle. Plus there’s a bunch of chat about Tolkien’s Lord of the Rings being an allegory for WWII, which it’s not, but fuck it we’re going to read it that way.

So here’s a couple of things to chew on – just general things about The Lord of the Rings that are worth thinking about as an introduction to talking about Wolfenstein. We know that Tolkien had a really negative reaction to industrialisation. Think about when Saruman goes into full production mode in The Two Towers – I’m just referring to the movies here, because they’re more familiar to most people. He starts cutting down the trees and setting up forges and making machines and steel and so on – listen to this big Evil Villain speech (from here):

“The old world will burn in the fires of industry. The forests will fall. A new order will arise. We will drive the machine of war with the sword and the spear and the iron fist of the orc.”

And then he goes off and tears down the forest of Fangorn. What an evil man! And note that in the end, Saruman is defeated when the forest gets up and beats the shit out of him. They unplug the dam, bring water back into the area, quench the fires of industry, and start to green the place up again. Compare this letter of Tolkien’s that I pinched off Wikipedia:

“Well, the first War of the Machines seems to be drawing to its final inconclusive chapter – leaving, alas, everyone the poorer, many bereaved or maimed and millions dead, and only one thing triumphant: the Machines.”

The whole theme of nature vs industry isn’t a new idea – it’s been around for at least a couple hundred years at this point – since the Industrial Revolution, funnily enough. But when we’re talking about Wolfenstein, Tolkien is an interesting point of contact. He’s writing during the Second World War, which is what Wolfenstein is concerned with, and he’s writing about the interplay between industry and the pastoral world, which again is what Wolfenstein is concerned with. As I mentioned before, Wolfenstein replaces the idyllic Hobbiton with the all-American white picket fence, but there’s still some important similarities. In both cases, the enemy is the Machine.

So: quick couple points from the plot of The New Order. In that timeline, the Nazis win WW2 because they find a bunch of super advanced technology. It’s all Jewish technology, and we’ll get back to the Jew thing later – but for now, just note that the whole premise of The New Order hinges on the Nazis having super advanced technology. In this world, tech is the tool of the enemy. When BJ is on the roof of the truck on the way to Eisenwald Prison, he has a monologue that’s strikingly similar to Saruman’s, albeit from the other side.

“Steel. Stone. Concrete for miles. I wonder if there’s anything in this world worth saving. Desolation. Tyranny. Enemy of endless might. I’m wondering if I have any friends left standing.”

This whole sequence is intercut with shots of Nazi architecture, based on a brutalist style. You can see them in the screenshots used throughout this article. Again, the main concern for Blazkowicz is the whole industrialised tone to the place. There’s no grass or flowers or shit – just steel, stone, and concrete for miles. The music design has a similar division – when BJ is in a natural or good place, there’s lots of acoustic guitar gently strumming along. See the opening seconds of this cutscene, from the asylum. By contrast, when Deathshead is forcing you to choose which friend loses their eyeballs, you get static and electrical pulsing noises. I don’t have the language to describe it properly, but again there’s a really clear distinction between the sounds of the machine, and the sounds of proper, gentle, decent humanity. The sound design plays on that thematic distinction that’s present throughout the rest of the game.

So in this interplay between the mechanical and the human, brutalism comes out as the symbol of dehumanized machinery. BJ actually refers to the buildings as “concrete monstrosities” at one point, which is funny because brutalism is often used as a kinda slur term against any concrete-looking building that you think looks a bit dumpy and shit. Basically brutalism was already getting a hard time, and then the developers of Wolfenstein used it as a symbol of inhuman Nazi machinery. So the two screenshots above are clear instances of brutalist architecture. I don’t know if they’re based on anything in particular or if they’re just made up brutalist buildings, but that’s the style. Blocky concrete things.

Note, however, that the third screenshot, in the header of this post, shows a very different building. I’ve reproduced a similar shot of that building here – it’s not from the same cutscene, but it’s the same building. You might notice that it’s got a very different design ethos. It’s neoclassical rather than brutalist, most obviously in the huge dome. This massive building is the Volkshalle, a building planned by Hitler and his chief architect, Albert Speer, but never built. When you first see it after opening the curtains in Berlin, it’s meant to indicate that, yeah, the Nazis definitely won, because here’s Speer’s hypothetical project made manifest. So we’ve got a clear split between neoclassical and brutalist architecture. There’s elements of the historical Nazi Germany (or at least what they historically planned) mixed in with brutalism, which Wolfenstein treats as shorthand for the Machine. It’s not really totally fair on brutalism, which already gets a bad rap, but that’s what the game does. Brutalist Machine is bad, natural human is good.

I’ll end with a few diverging points. Firstly, note that the design philosophy behind brutalism isn’t really anything like how it’s being treated here. You might want to check out this article, which explores the historical philosophy behind brutalism in a bit more detail. Also, if you’re a nerd like me, you might be interested to know that the layout of the city in that curtain-shot is all wrong. Hitler wanted a big ol’ central avenue leading from the Volkshalle to a giant triumphal arch that was 100% designed to one-up the Arc de Triumph in Paris. You can see a picture of the old model city below. If BJ is looking straight on at the Volkshalle, he should also be seeing the Avenue of Splendours, which is the very imaginative name of that massive avenue you can see in the model. Lastly, just to balance out the portrayal of brutalism in Wolfenstein, I’d like to offer Gottfried Böhm’s Neviges Mariendom, a famous brutalist church. There’s three images below, and it’s just stunning. Just the sheer blank face of concrete – imagine praying with that bearing down on you. 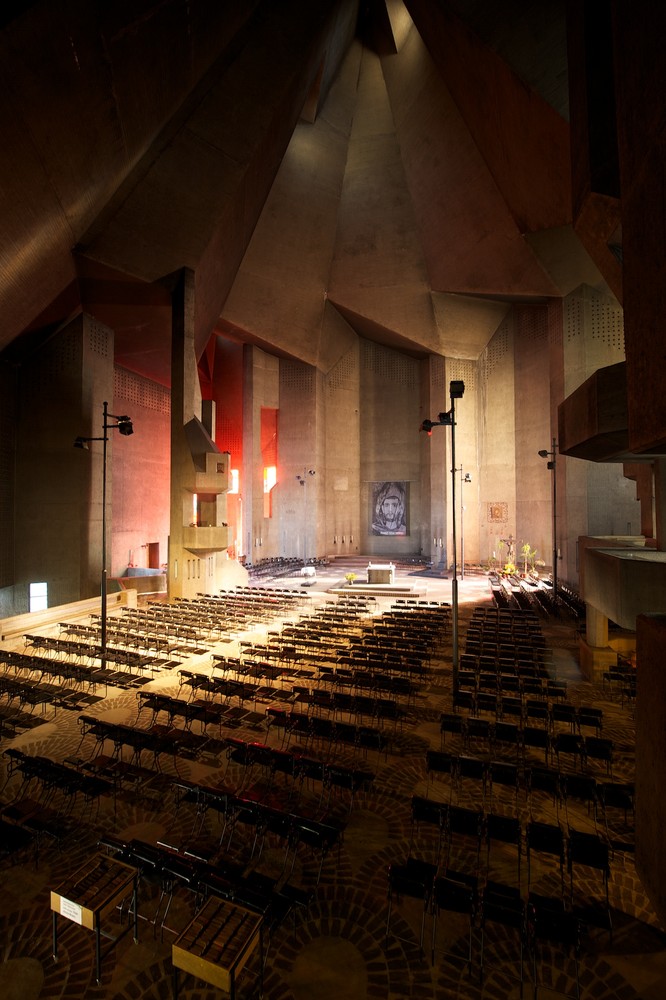