Continuing with our Wolfenstein series, today we’re looking at the work camp episode – or, uh, Camp Belica. It’s the one where you find Set Roth, and it’s all modeled on Auschwitz and so on. I’ll reiterate a little bit of content from earlier articles, just to show some of the continuity of themes throughout the game, and then focus on today’s main idea – using the tools of the oppressors.

So the whole work camp episode is pretty fucking grim. It draws on a bunch of very specific imagery from the death camps – most notably in the sign over the entryway into your cell block. It’s a deliberate echo of the sign over Auschwitz. You also have a number tattooed onto your arm, which is actually something that only happened at Auschwitz, although the game mistakes one detail – it was always the left arm, not the right. 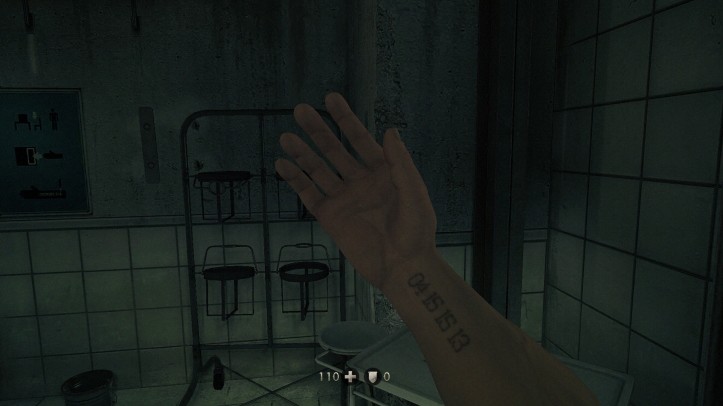 There’s no direct analogue to the gas chamber, but you’re stabbed in the chest by a guard and dumped in the incinerator with all the other bodies. That incinerator is about as close as you get to the chambers – we know that after prisoners were gassed, their bodies were incinerated. It’s one of the reasons it’s hard to pin down the exact numbers of the dead.

So you’re knocked unconscious by being stabbed in the chest, you wake up in the incinerator, and you crawl out just before it’s turned on. And then you start your murder rampage. This structure continues the device from the psychiatric hospital at the start of the game – Nazis do bad things to groups of people, and then one of those people rises up and fights back. You’re literally loaded into the incinerator, the final fate of those gassed in the death camps, and that’s where you start your revenge. 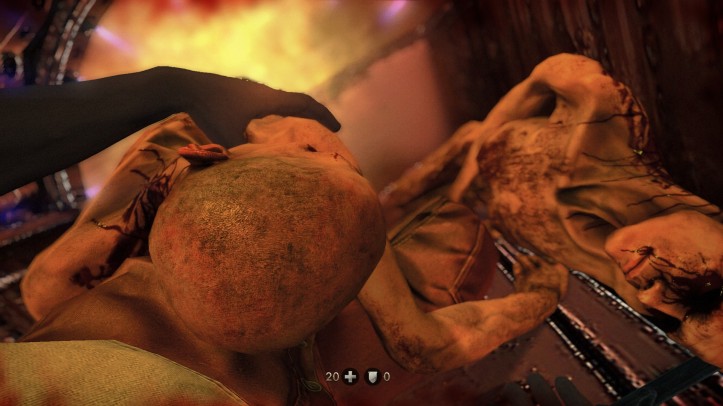 Ultimately you end up riding a Nazi death robot and running around the camp blowing everything up. You take Nazi knives, Nazi guns, Nazi death robots – just about everything you use in the game belongs to the Nazis. Even your HQ was built by the Nazis – it’s mentioned by Anya in one of the earlier cutscenes. And you take the things that belong to the Nazis and use them to tear the empire down.

So that’s one major form of resistance in Wolfenstein. You use the tools of the establishment to tear the establishment down. We see it worked out most aggressively when you’re all on the execution poles. You manage to mind-control the death robot at the last second, and it grabs the commander of the camp, Frau Engel, and fucking crushes her skull, making her exterior ugly like her interior. Again, see the earlier posts on evil and disability. The facial damage isn’t technically a disability, but there’s a broader concept of ‘deformity’ that’s within the same sphere. In the crudest way possible, her face is all fucked up, and that’s a sign that she’s evil. It’s the same as Deathshead. Other Nazis have lesser deformities, like the eye-patch Nazi at the asylum, but it’s all still the same type of symbolism. Notice as well that it seems a little mean to be talking about disability like this. Eyepatch equals evil? It just feels a bit shitty to all those perfectly normal people out there who coincidentally have an eyepatch. It’s kinda continuing to demonise that very normal and unthreatening disability. 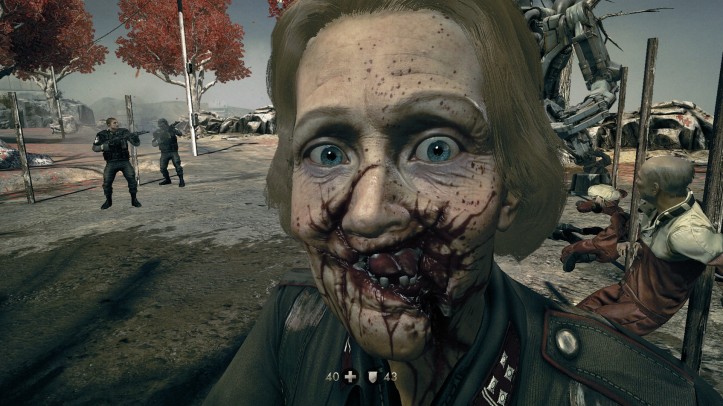 A second type of resistance involves undermining the products of the empire. It’s a bit of a background plot point that many people might skim over, but you find Set Roth through a very specific chain of events. One of the papers that BJ brings home from the Nautica mission describes a process for creating concrete – Anya describes it as “the essential building material of the Reich.” This recipe originally belonged to a secret Jewish science conspiracy (more on them in a later article), but now over time the concrete is apparently degrading. Logically, Anya suggests, someone has changed the mix – someone who understood the original recipe. It must be one of the secret Jewish scientists. The mix is being put together at a specific camp in Northern Croatia, and so the resistance sends BJ to Croatia to find the Jewish scientist and get him out alive. That’s the premise of this whole work camp episode.

I say it’s a bit of a throwaway plot point because really who cares how you find Set Roth – we know they’re just making up some random justification to go get him for plot reasons. However, what’s interesting about this explanation is that it actually ties into a minor gameplay element. Wolfenstein is sort of a cover-shooter, in the sense that cover does technically exist in the game. It’s nothing like Call of Duty, but if you need a moment you can duck down behind a waist-high wall. To stop you lingering too long, however, those walls are made destructible. You can sort of see the remnants of a couple in the center of the image below. Anyway, point is, the in-world explanation for their destructability is that Set Roth has been fucking with the concrete mix. His act of resistance changes the makeup of the game field. It’s arguably not a huge change, but, well, every little helps. 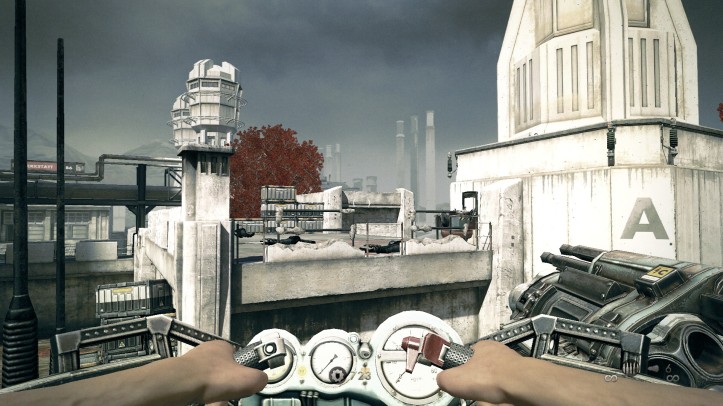 And on a broader thematic level, again, what’s really happening is that Set Roth is undermining the essential building material of the Reich. He’s weakening the (architectural) foundations of the whole Nazi enterprise. If BJ uses the tools of the Reich against itself, Roth is trying to undermine the Reich by weakening its tools. To some extent those methods don’t mesh nicely – notice that the Nazis can shoot out your cover too. Shitty concrete is shit for everyone. But I think overall the haphazard approach to resistance suggests something of the scrappy and piecemeal nature of those various projects. They all have the same goal (of tearing down the Nazis), and they just sort of haven’t really coordinated, because, you know, one of them was in an asylum and the other’s in faux-Auschwitz.

Even though the efforts are relatively scattered, let’s consider briefly some of the points of overlap. Both are acts of subversion from within a fascist society. Both work within the frameworks provided by that fascist society – one uses the tools, and the other makes the tools shit. Both of those actions are fundamentally misusing normal social functions within fascist society – that is, using tools and making tools are both normal parts of what the Nazis do, but BJ and Set Roth basically just do those things badly, in a way that undermines the entire system (see Aquinas’s theory of evil for an interesting point of contrast). The two freedom fighters actually provide an alternate perspective on the thesis put forward in something like “Fifteen Million Merits”, the Black Mirror episode. In that episode, the main character Bing (played by Daniel Kaluuya of Get Out) rages against a hyper-commercialised system where everything’s fake and manufactured and there’s nothing real any more. One of the judges, clearly modeled on Simon Cowell, congratulates Bing, tells him he’s really authentic and real, and offers him his own TV show to continue his protests. The final scene closes with Bing recording a protest from his big new apartment. He’s still protesting, still making legitimate points about commerce and entertainment and this broken fucked up system – but all the fire’s gone out of it. At that stage, he’s just another cog in the machine. Resistance, for Black Mirror, is just another aesthetic, just another type of product. It’s controlled by the machines of capital and it has no revolutionary potential.

So between Wolfenstein and Black Mirror, we have two relevant positions – resistance works, and resistance doesn’t. More specifically, even, the two positions comment on resistance that uses the tools of the system. Wolfenstein suggests that the tools of the system can be used against it. Black Mirror suggests that they can’t – that if you’re using those tools, you’re ultimately just part of the system, no matter how revolutionary you think you are. It’s not really appropriate for me to try and tell you which one’s correct – instead, I’ll leave you with this, a short little four-minute reflection on the topic from Folding Ideas. It’s in a Youtube context, obviously, but there’s a lot of overlap. I was going to use some quotes throughout this article, but it got to the stage where I was quoting the whole second half of the video, so, uh, just go watch it instead.