I’ve been thinking more about the issue of disability in Wolfenstein, because – well, with any more than two seconds’ reflection, you can see that the concept of ‘disability equals evil’ doesn’t actually hold true at all. I said it did a few weeks back, and that was dumb. Let’s make a list of all the various disabilities and disfigurements throughout Wolfenstein: New Order, and then we’ll revise the theory accordingly.

In no particular order, the various disabilities and disfigurements on the hero side of Wolfenstein: New Order include BJ’s scarring on the back of his head, Caroline’s paralysis, Max Hass missing a third of his brain and being mentally disabled, and the soldier in the Prologue (‘Head Wound’) who ends up with an eye missing and also broken feet. The Jimi Hendrix character in Wyatt’s timeline also has facial scarring under his bandanna, and Klaus Kreutz’s son was born with a club foot. Also literally every single patient in the asylum had some form of mental disability. In New Colossus we also get Fergus or Wyatt losing an arm or ear respectively, Grace’s extensive burn scars from the bombing of Manhattan, and BJ’s body gets battered to fucking hell and ultimately completely destroyed. Just to name a few instances.

And I mean fuck me, when you’ve missed that number of obvious disabilities on the hero side, you might as well just turn in your badge and go. Just get out of here – go on, fuck off to your room and think about what you’ve done. Ugh. 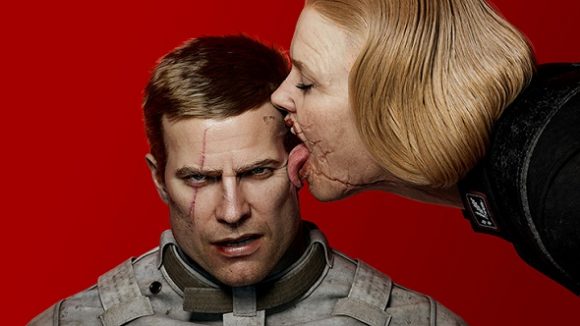 This image above is the one that made me finally realise where I’d goofed. I was looking up some information on Frau Engel, just to check I had her details correct, and the image just popped up on the Google search – you know it’s got the previews of a few images on just a normal search. The image caught my eye, because ew, and then I noticed BJ’s scar. Oh, I thought, I’ll have to revisit that in my articles on Wolfenstein II. Something about the developing conception of scarring and deformity. And then – honestly it was like that moment in Finding Nemo where Dory remembers everything at once. All these memories just come flooding in – and I’m sitting there thinking fuuuuuuck. Anyway let’s talk about heroic disability.

Obviously disability is something that’s actually heavily featured on both sides of the game. The heroes have just as much disability and deformity as the Nazis – so obviously, then, disability doesn’t always signify evil. So are there any patterns to how disability is represented for different types of characters? Any trends that further shape our understanding of disability as a theme? Well, yeah, there’s a few.

Firstly, note that the heroes always accept people with disabilities where the Nazis typically don’t. The asylum patients are referred to as subhuman for having mental disabilities or mental health issues, and Klaus’s baby son is murdered for having a club foot. By contrast, the heroes are willing to accept these types of people – Anya’s parents were obviously quite happy looking after their patients, and the resistance look after people like Max.

But assuming that argument, why are some people with physical deformities (Deathshead, Engel, Eyepatch Nazi) allowed to be high-level Nazi officers? Simply put, why don’t the Nazis kill them for having these deformities? Why does Deathshead get a pass with his weird burned up little face? Partly the issue here is that as a symbol, deformity is overdetermined in New Order. It has a whole bunch of symbolic meanings, and some of those meanings are contradictory, or they only apply in certain contexts. Deformity becomes a complex and multifaceted symbol. For those Nazis we’re discussing, deformity still clearly signifies evil. Deathshead and Engel look munted because they’re evil and deformity in those instances is functioning as short-hand for evil.

If we’re following a really strict reasoning, yeah, maybe they would’ve been executed by the Nazis for their physical imperfections. But I think the point here is that the game isn’t necessarily following a really strict reasoning with these symbols. They communicate different things in different contexts. Consider that both Eyepatch Nazi and Head Wound lose an eye, and yet Eyepatch Nazi continues to be a high-ranking Nazi throughout the fourteen years that BJ spends in the asylum. It’s the same physical injury, but different rules apply. They suggest different things. Eyepatch Nazi has a deformity because he’s evil – just like Emilio Largo or Le Chiffre or Raoul Silva or literally any other Bond villain. By contrast, Head Wound’s injury indicates the suffering of the Allied powers during the war. People get hurt and wounded, and they carry on as best possible. The war comes with a cost. That’s what the injury for Head Wound is supposed to suggest. It’s what BJ’s injuries suggest too – and Caroline’s, and J’s, and Grace’s in New Colossus.

There’s a similar set of symbols around sexuality in New Order. I mentioned in an earlier post how Engel has her ‘depraved’ sex life with Bubi – again, disclaimer, I don’t personally think it’s depraved, but it’s how the game presents that sexual relationship. By contrast, there’s also a few scenes of Anya and BJ having sex, and it’s passionate and energetic and – really, the best word for it is natural. That’s how the game presents it. And the message isn’t that sex is good or bad in itself, the message is that sex – like deformity or disability – is a realm of human life where the different camps have wildly different attitudes. The Resistance has normal sex; Nazis have weird sex. The Resistance loves you no matter what; Nazis hate disability, but they also have a bunch of officers with deformities to signify that they’re evil. That last bit is still really a contradictory attitude on the behalf of the game, which, yes, is still using disability as a shorthand for villainy in at least some instances. It’s also using a relationship between an older woman and a younger, effeminate man as shorthand for depravity. Which, yes, again, is still shitty. I’d really like to collapse that shitty portrayal back into a discussion of BJ’s physical appearance – why does the protagonist look so Aryan? – but at some point it’s probably reasonable to accept that maybe these guys just fucked up their story a bit.