Alright, we’re getting into Wolfenstein II now. This post mostly focuses on the rules of engagement – how I’m approaching the text, what I’m looking for, how things are going to be arranged. It also talks briefly about some of the potential game design issues, with the massive caveat that these technical issues of lighting and sound are 100% not my forte, so I might be totally out of line on those questions. I’ll also note now that there’s quite a lot of these articles to get through, so I’m going to apply my usual practice with the theology posts. It’s three weeks on Wolfenstein, and then one week for something else. That’ll be the schedule for the next few months.

As with the initial run of Wolfenstein: The New Order articles, I’m going to play through the game and write articles based on when that theme first pops up in the game – or when I first notice it, if you like. I’m also going to be much more focused on the plot structure, because it has some really awkward moments for me. New Order didn’t really have anything comparable – everything just flowed really neatly, it’s got a really strong narrative structure. New Colossus kinda moves in awkward spurts – lots of stopping and starting, lots of kinda cul de sac plotlines. So I’m going to stop and talk about those when they come up. There’s also some really rich thematic material that’s probably underappreciated. So we’ll just move through and see how we go. I’ll probably have more to say about this game than about New Order, partly because it’s got really interesting problems. That said, I expect I’ll also be referring back to the original New Order articles pretty regularly, just to touch base and show how some of the themes discussed in that game are also on display here – usually in a much more dramatic way.

So those are the rules of engagement. The rest of this post is going to focus just on some of the technical issues that I know have been raised against the game. I just want to touch on them briefly, acknowledge they exist, give a couple thoughts and move on. The first big one refers to the game’s lighting.

In the crudest way possible, Wolfenstein II has a bunch more mood lighting and arguably less sensible ‘which way am I going’ lighting. I’ve seen people talking about how they got lost more easily in this game – and I’m not citing sources for that claim, which is lazy, I know, but point is it’s my experience too. Actually there was a video I watched a couple years back criticising the lighting, and I was thinking about it going into these articles, but it’s been taken down since then. So no sources for you. I’ll give you a couple examples though. In the image above, you’re supposed to go up the ladder in the middle of the frame. But notice that it’s not lit in a particularly clear way – the lighting doesn’t exactly draw your attention to it. Instead we’ve got the big old machinery thing on the left with all the lighting focus. It’s atmospheric, sure, and there’s a big thing in New Colossus about the interplay of light and dark areas. In some ways this screenshot is a pretty good example – there’s a really strong lighting contrast, with the bright harsh white light on the left, a bunch of darkness, and that quieter dull red over on the right. Compare this one screenshot I pulled from New Order:

It’s only one image, and I don’t want to claim that it’s representative of the whole game, because that’s not justified. But we can make a few introductory comments. Firstly, the New Order screenshot is generally much brighter. You can make out everything in the image. Contrast the New Colossus screenshot, which is obviously very dark in certain areas. If you’re sprinting around and shooting Nazis, it might be difficult to tell immediately whether there’s a Nazi hiding in the dark. That difficulty is only exacerbated by the striking brightness of other areas – you’re moving between low light and bright light, making it harder to adjust to the darkness. The lighting in New Colossus also makes the area seem a lot bleaker, a lot more – well, a lot more brutalist, frankly. Makes you think of this kinda building: 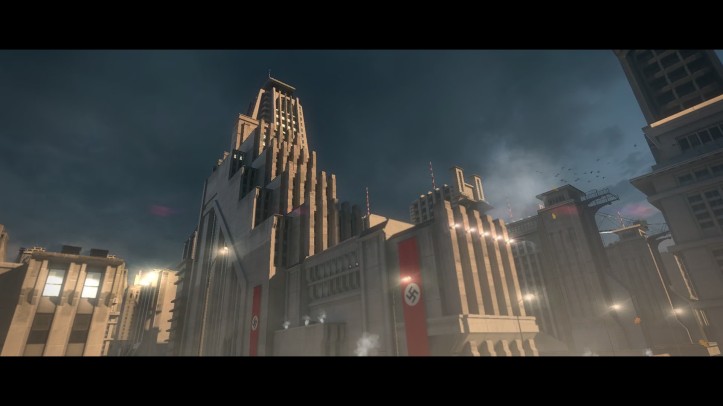 Again we’ve got the really aggressive contrast between light and dark areas, and lots of bold, stark surfaces. New Order seems less stylised by comparison – it’s kinda just a room with some Nazi banners. Probably the closest point of analogue, from an architectural perspective, is Deathshead’s compound at the end of New Order:

We’re pretty screenshot-heavy today, sorry about that. Point is, New Colossus probably has the more interesting visual design for its areas. There’s some really interesting thematic choices being made, and the space as space is lit according to really deliberate aesthetic principles. The downside is that those spaces are kinda less functional as game spaces. Your attention isn’t drawn to the ladder. You really have to take time to familiarise yourself with the space, and with a run-and-gun type game, that’s not necessarily a good thing. I’ll give you a second example of this weird gameplay lighting – actually seconds after the first example – and then we’ll move on.

You can see the same issues in play here. Lots of strong light-dark contrast, that really offensive white light again, and the ladder at the back in shadow. Arguably this example is weaker, because there’s only really one way to go – you just move forwards along that white strip and then – surprise! – a ladder. So the lighting design here doesn’t confuse or interrupt your progress in the same way, but you can see why people might have taken issue with it. Compare these two moments of light as framing in New Order:

Again, disclaimer, these instances aren’t necessarily representative, and New Colossus might have a bunch of intelligent lighting choices that I just haven’t found yet. That said, my gut instinct is that New Order does a better job at lighting from a gameplay perspective, highlighting the stuff that’s important for you to see in order to move around and, uh, not die.

My second point has no screenshots, because it’s not a visual issue. It’s a sound problem. Well, not a problem necessarily, uh, more of just a comment. Here’s the thing – bad guys in New Colossus don’t make noise when they move. They’re very fucking quiet. And that’s weird, right, they’re in big heavy armour, they should be making some noise. From a stealth perspective, it would be great if you could maybe hear some footsteps so you could tell if a motherfucker’s around the corner. Pay attention to the sounds of each guard in this Dishonored clip – move to 15:26, I’ve told the video to start there but it’s possibly being a bit goofy. You can hear footsteps, a weapon or something clinking, one of the guards is muttering to himself, your target is talking out loud – there’s a bunch of clear sounds to indicate a character’s position.

You can hear the protagonist’s footsteps, but there’s no audible sign of the first guard round the corner. Or note the third guard at 13:15. There’s a buzzing sort of noise that sounds like it might be something from the guard, but it’s actually the electric charger on the right as BJ moves up the corridor. The only footsteps you can actually hear are your own. You can keep looking for other examples throughout the video – I’ve watched it through, and there’s nothing. There’s something that sounds like footsteps at 17:15, but if you listen for a few seconds more, it’s actually part of the soundtrack – you hear it again seconds later. You finally hear the giant Nazi death robot walking from 17:23ish, and even that’s relatively faint under the rising electro soundtrack. You’ve got a two-ish second window between 17:24 and 17:25, and then :26 is when the music picks up and largely drowns it.

I’m not sure if the music is queued to the monster’s movement or arriving at the trapdoor down into the end of the level. It could just be bad timing, if it’s to do with the trapdoor, but even so, there’s a general comment that holds true: enemies make little to no noise. There’s no footsteps. I’ve often had the experience in New Colossus of being shot at, but not knowing where the bad guys are. That’s partly a level design problem, but it’s also a problem of sound design. If they shouted more, or made noise, you might have an easier time figuring out where they are. Thing is, New Colossus is not an easy game. It’s hard. But I suspect that the difficulty partly comes from some bad design decisions, rather than entirely from a built-in and intentional difficulty. It’s the distinction between games that require skill and games that are just kinda unwieldy.

Anyway, wow, ah, we’re running well over time, so I’ll leave it there. That’s a general intro to how I’m approaching New Colossus, and a couple gripes about the sound and lighting design. As noted before, these aren’t really my areas of expertise, so I could be really wrong-footed with my arguments. That said, my basic instinct is that New Colossus has a really interesting story, but is a bit of a clunky game. These initial gripes about sound and lighting, if they’re relatively valid, do kinda highlight that basic position.