I said at the start of these articles that one of the major themes of New Colossus is that of parenting. We’ve got BJ’s relationship with his parents, and Sigrun’s relationship with General Engel. I haven’t said much about Sigrun, but we’ll get to her in an article soon; in the meantime, I want to stay focused on this section between the end of Roswell and the start of New Orleans. In particular, today, I want to focus on the scene where BJ kills his father.

So I’ve said that the overarching story arc of New Colossus is about liberating America. That’s true, but a closely related second plot is about BJ’s relationship with his parents. In a sense, the Blazkowicz family represent a miniature version of the wider American conflict. You’ve got those who side with the fascists, those who are the victims of the fascists, and their conflicted children, raised in violence but hoping to end it, tied to both Jewish and Nazi identities, both Jewish and Nazi heritage. That’s a great set-up for exploring the complexities of American identity. Of course, it’s never quite fulfilled. If you want to summarise the fundamental problem with New Colossus, you could say that it spends a lot of time exploring BJ as Zofia’s son, but not enough time exploring BJ as Rip’s son. Nobody mentions BJ’s white privilege. Nobody mentions that he was benefited by the same forces oppressing black communities. I wrote about this issue at the end of the article on Grace: BJ is off shouting about white-ass Nazi fascist pigs and nobody stops and goes ‘uhh what?’

I’ve also talked before about the ways in which BJ imitates Rip. They’re the more troubling, but arguably also more fascinating, parts of his character. And there’s a really clear metaphor in there about how America (represented by BJ) is made up of both good and bad histories. He’s Zofia’s son, but also Rip’s. Really for me the benchmark is always not-Jimi-Hendrix’s comment in New Order: white Americans were the Nazis before the Nazis. By pointing out the history of slavery in America, not-Hendrix shows that BJ is not an innocent. He’s not pure and perfect, he’s part of a culture that has benefited and continues to benefit from the oppression of its black community. He is, in part, Rip’s son. For all its strengths, New Colossus never confronts American identity in the same brutal way.

But alright, we’ve got this basic set-up of BJ’s relationship with his parents. It’s never fully utilised, but it exists. Curiously, that narrative is resolved basically at the halfway point of the game. BJ’s trip to his family home falls halfway between the game’s major missions. You’ve got the Ausmerzer, Manhattan, Roswell, the family home, New Orleans, Venus, and the Ausmerzer again – that’s the structure of the game. By ending the narrative of BJ’s parents halfway through, you’re disconnecting it from the wider story arc of liberating America. There was huge potential for one to serve as a metaphor and commentary on the other, but that potential is lost when the family storyline is resolved. I’m not totally sure what they were trying to gain with that positioning, unless it was like a rising action end of Act Two kinda thing. 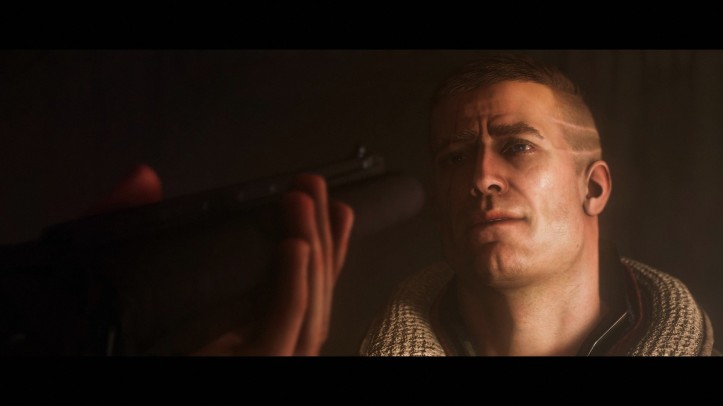 Anyway, I want to talk about what actually is in the game, instead of complaining about what should’ve been. Let’s have a quick run through the family home sequence and see what the developers do with it. BJ returns to the house because he wants his mother’s wedding ring. You see it in the opening sequence of the game: she shows him the ring, tells him it’s for his future wife, and warns him not to tell Rip about it. By coming back for the ring, BJ is preparing to propose to Anya. He’s going to make their relationship formal through marriage, repeating the husband and wife relationship of his parents but being a better father than Rip. It’s a way for BJ to work through his feelings: he creates the same situation, but acts with love and affection, providing his children with the things that he lacked in his own relationship with his father. It’s that same odd pattern of resistance and imitation that so often defines the relationship between child and parent. In a sense, then, going for the wedding ring and killing Rip are kinda synonymous actions. The initial act of going for the wedding ring is in itself a denial of everything that Rip stands for, everything that he’s been in BJ’s life. After that, the actual act of killing Rip is almost incidental. It’s just another expression of that basic act of denial.

It’s worth noting as well, actually, that Rip comes after BJ with the same shotgun used to kill the family dog. This whole sequence therefore serves as a direct response to that opening scene. In the first scene, Rip forces BJ to murder the helpless dog. He forces BJ into the position of oppressor. In the second scene, BJ responds to that forced positioning by refusing it. It’s a call and response: his father essentially says ‘You are an oppressor like me,’ and BJ says ‘No I’m not.’ That’s the emotional core of this scene. It’s the link created by that shotgun. In a way, the emotional core would still be intact regardless of what happened next. Rip could murder BJ and BJ would still win – he’s rejected his father’s system and rejected the status as oppressor. He has, in a sense, atoned for the crime of murdering the dog. 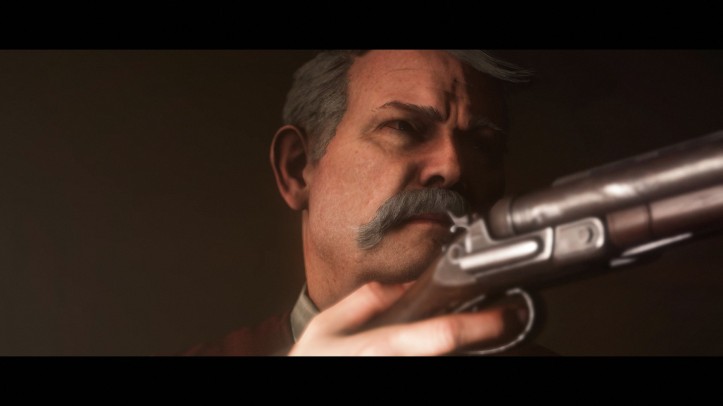 Of course, the outcome that the developers chose is better. If Rip killed BJ, Rip’s system of violence would go unchallenged. Also the game would be over, but – think about this more in terms of narrative structure. If BJ allows Rip to kill him, Rip’s system of violence gets to continue. BJ is actually allowing himself to still be defined by Rip’s system – not as an oppressor, but as the oppressed. As the victim. By actively resisting and killing Rip first, BJ refuses to conform to the oppressor/oppressed binary. He doesn’t fit easily into one of those two boxes. He is both violent and anti-violence, both victim and murderer. He doesn’t just refuse the oppressor status offered by his father, he takes active steps to confuse and deconstruct the binary of oppressor/oppressed. Again, it’s that really difficult parent-child relationship, where the child both imitates and resists their parent. BJ both imitates and resists the violent systems of his father. He refuses to be the oppressor, and refuses to be the victim. He fights back, performing the violence his father tried to instill in him but redirecting it towards his father. There’s an ambiguity to the whole situation. BJ doesn’t necessarily move totally beyond his father’s violent behaviour, because he’s still out killing. But he disrupts it, turning those systems against themselves by murdering the murderers. There’s a really interesting kernel there about the best way to acknowledge and move past America’s awful history. It’s not a clean break, it’s not a perfect separation, it’s accepting your heritage and looking for ways to move forward beyond its limitations.