When BJ meets the communist priest Horton Boone, they have an argument about their relative methods and ideologies. Horton criticises the bourgeoisie, and BJ argues that Horton failed to stand up to the Nazis. It’s a pretty fucking heated conversation. It’s legitimately exciting to see in a video game. But here’s my question: why doesn’t Grace get to have an ideological argument with BJ?

If you haven’t seen the argument between Horton and BJ, it’s pretty great. I’ll link it in here. I’ve also transcribed a bunch of the dialogue in below – there’s a few different points that I want to pull out of it. We’ll start with some of the basic points. First, Horton is a communist:

“Oh, we be the outcast, the poor. Well, everyone who ain’t part of the American god damned bourgeois.”

He initially refuses to join the fight. BJ calls him a coward, and he replies:

“We been a-fighting for a revolution since long before the Nazis came here. We were the first to start building a civil rights movement to advocate equality for everyone. You know the concept of civil rights, Terror Billy? No you don’t. You just a jarhead, ain’t you.”

This is interesting stuff. Horton starts to call out BJ for basically being a pawn of the American government. He criticises the government and the lack of equality in the wider contemporary American society. It’s exactly the kinda stuff that I’ve been talking about throughout this series: if Wolfenstein II wants to do the thing of Nazis in America, it needs to find the parts of American culture and history that veer uncomfortably close to Nazism. Having someone call out the widespread inequality of 1960s America is great – it’s actually suggesting that maybe America has some soul searching to do. At the same time, BJ gives as good as he’s getting:

“Buddy, I laid my life on the line for freedom, justice, and the American way while you and your Bohemian friends were passing out Bolshevik propaganda and opposing the draft on every street corner. What good is your fucking equality, you can’t muster the backbone to stick up for your people while the coyote is scratching at your front door?”

It’s a rip-roaring argument, and BJ is holding his own. Pacifism and anti-war sentiment are generally good things, but it’s kinda hard to say that we shouldn’t have gone out to stop the Nazis. If you want to look at pacifism in WWI, that’s one thing. Pacifism in WWII is a whole different ball game. Horton’s not having a bar of it:

“We stood up against the imperialist war machine of the United States of America and the greedy money men of Wall Street, who was itching to send the children of the proletariat off to die in foreign lands so that they could be filling their coffers. It weren’t their sons bleeding on the beaches.” 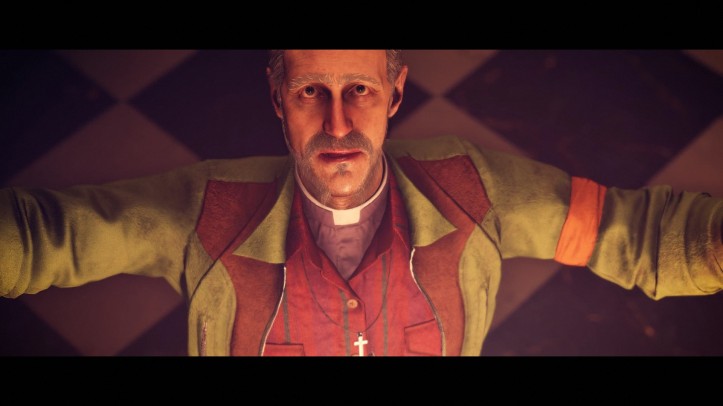 So we’ve got the money thing again, the war profiteering, that sort of thing. WW2 started in 1939, right, but the Americans didn’t join in until 1941, after Pearl Harbour. Before that, they were making a fuck of a lot of money as war merchants. For instance, General Motors and Ford (along with other companies) were selling trucks and oil to Franco, and other companies were selling oil and planes to the Japanese, ironically. From that perspective, Horton’s point isn’t entirely coherent – at least not in terms of what actually historically happened. America didn’t enter into the war for financial gain. They were doing fine by staying out of it and selling shit to the fascists. To be clear, ah, the Americans did also provide support to the Allied powers, but it was largely non-military support because of the Neutrality Acts, which were put in place because the people wanted to be all isolationist and leave Europe to fight its own battles. That attitude was caused in part by books like H.C. Engelbrecht’s The Merchants of Death, which argued that the Americans were manipulated into entering WW1 by bankers and war merchants who wanted to profiteer. So Horton is wrong, from a historical perspective, but he’s also using the argument that historically resulted in America not doing the thing he’s accusing them of. Whoopsie.

But alright, anyway, Horton has his anti-war thing, and he ends up saying this to BJ:

“You’re the pawn, the patsy of cantankerous men in marble mansions.”

That’s a pretty confrontational thing to say. Horton is implying that all of BJ’s work, all of the pain and torment and war and death, it’s all just capitalism and not a principled stand against Nazism. That’s intense, sure. But now we can return to my question from the start: if Horton is allowed to argue that BJ’s a pawn of the establishment for fighting Nazis, why can’t Grace also call BJ out for benefiting from racism and the heritage of slavery? For one, she’s probably on firmer ground with that claim than Horton is with his. For another, New Colossus is (supposedly) much more concerned with the lives of black Americans than it is with the merits of communism. And yet Horton gets to have his ideological debate with BJ, while Grace gets nothing of the sort. Horton gets to call BJ a tool of the establishment, a claim that threatens to undermine the value of his immense efforts fighting Nazis for the last couple games. Curiously, the only other person who does anything remotely similar is J in New Order. I’ve talked about this moment a bunch, I know – but it’s a really important point. In a game about Nazis in America, a game that references Trump and Richard Spencer and Black Lives Matter and therefore the entire racial history of America to date – in a game that does all of that, nobody thinks to mention that the main character might be implicated in those same systems of racial privilege and oppression. The wacky communist gets to challenge BJ as a tool of the establishment, but not the fucking Black Panther stand-ins. Is racism real in New Colossus or not? It seems to be real in New Order, but by the time its sequel rolls round – the sequel, mind you, that claims to be exploring the complicated racial problems of America – everyone’s lost their teeth. Nobody wants to talk about race in New Colossus, and it’s shit.

I’ll end with this. If we’re being really nice to New Colossus, really generous, we might imagine that Grace doesn’t challenge BJ about black-white relations because black people in New Colossus are sent to the death camps just like the Jews. Maybe Grace sees BJ as an equal, as someone who’s suffered the same things as her. We’ll talk more about that idea next time, but it’s where the game gets into some really fucking dodgy territory.