Modern Warfare: The Hagiography of War

I want to return briefly to the opening scenes of Modern Warfare. Obviously it’s a text that I write on quite a bit, and playing through it again recently prompted some additional thoughts. The first thing I’d like to suggest is that although the game does serve as a hagiography of war, it’s much more enchanted by front-line soldiers than by the military-industrial complex more broadly. In fact, it’s often hostile and even dismissive towards the top brass.

The strongest example of the game’s distaste for military leadership comes in Modern Warfare 2, where the bad guy turns out to be an American general perpetuating the war for his own selfish reasons. But it’s worth taking that distaste and reading it back into the original Modern Warfare, where it still shines through quite clearly. For instance, in the first American sequence, you are sent to raid a house where evil baddie Al-Asad is believed to be hiding. When you arrive, it turns out he’s not actually there. Staff Sergeant Griggs quips “Score one for military intelligence.” Soldiers fought and died getting into that room to look for Al-Asad. The effort was wasted – the brass fucked up. 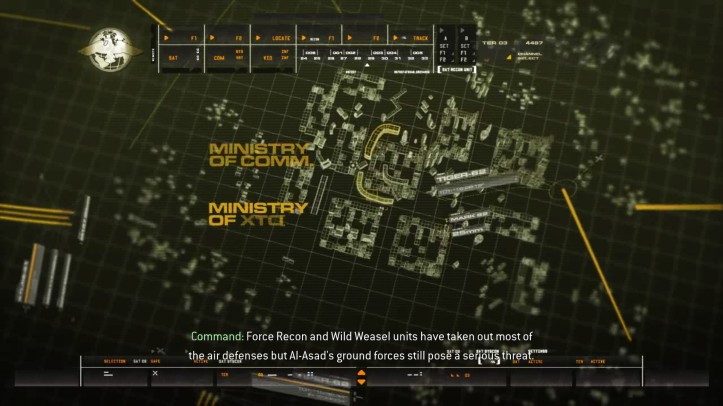 Similarly, the Americans also fail to detect the nukes in time to evacuate their soldiers properly. Despite this massive failure, the helicopter of protagonist Paul Jackson decides to return and try to save a downed chopper pilot. As we know, they don’t make it out in time. But notice that the tragedy of that moment is increased by the juxtaposition of two elements: the failure of the brass against the bravery of the soldiers on the ground. The nobility of those soldiers almost dictates that they must return for their downed comrade, even at the expense of their own lives. It’s very ‘Charge of the Light Brigade’:

“Was there a man dismayed?
Not though the soldier knew
Someone had blundered.
Theirs not to make reply,
Theirs not to reason why,
Theirs but to do and die.”

The attempt to save the chopper pilot was foolish and impractical. It cost Jackson’s crew their chance at escape. That is essentially the hagiography of war in Modern Warfare: the brass are shit, but the soldiers on the ground would lay down their lives for each other. A further example arises with the British troops later in the campaign. The soldiers have set up defenses and are waiting to be picked up, hopefully before a rampaging army of Russian baddies arrive. The defenses all work perfectly: mines, miniguns, explosives, everything, and the soldiers tactically retreat back to the barn for pick-up. And then, naturally, HQ calls in and says ‘Actually you have to be down the bottom of the hill, we can’t pick you up from the barn any more.’ As a final example, at the end of the game, Price and crew are trying to escape the nuclear base, and HQ is being no help at all:

“Request helicopter gunship support! Over!”
“Working on it, Bravo Five. Loyalist forces in the area may be able to assist, but we cannot confirm at this time. Baseplate out.”
“Useless wanker!” 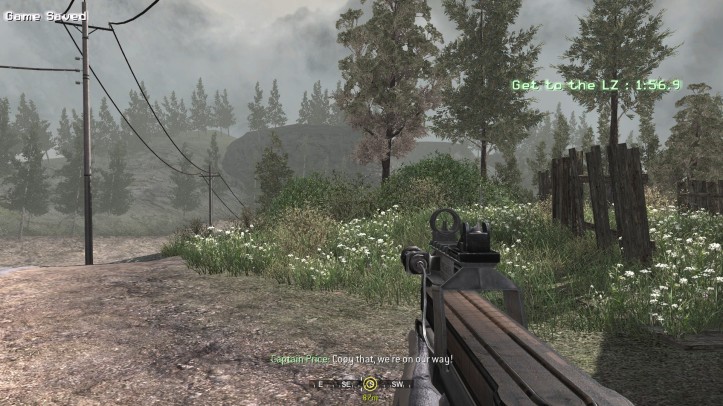 At the climax of the game, HQ is unable to offer any meaningful support. “Captain Price!” Gaz yells. “We’re on our own, sir!” Just a few good men, a handful of bullets, and the whole Russian army bearing down. The game’s furious final scene is underpinned by the utter lack of support from HQ. It’s a lack that again has consequences: Griggs and Gaz both die. But it’s also a lack that emphasizes the skill and professionalism of these soldiers. Like Jackson and the Americans, they do their duty even unto death, even with those absolute morons upstairs. And like Jackson, they don’t die ignobly. They saved America from nuclear bombardment. Even if they do die getting away, they died as heroes. The world does not deserve them. Their bosses certainly don’t deserve them. But they serve and protect nonetheless.

I’d like to end with reference to one little scene right at the start of the game. It’s a really fascinating moment in the context of this hagiography. I’ve written before about how the Modern Warfare games are essentially a form of hero-worship. That fits with the basic idea of hagiography that I’ve explored here. But there’s a little twist. The game wants to make it clear that you are supposed to admire these bad-ass soldiers, more from the perspective of an outsider than as one of the boys. How do you go about that? Well, you make the player act as the new recruit – easy enough. But we still need to create some distance between the player and the long-term soldiers, otherwise the player will just assume that they belong among the ranks and stop adoring the soldiers from that outside perspective. Option one is to make the soldiers a little hostile to the player-character, to make it clear that they’re not fully welcome. But then you end up with that awful narrative structure: there’s like a new person, and nobody respects him, because he’s new, and they all think he’s shit, but then he does something amazing and everyone’s like whoaaaaa and after that he’s the king. It’s Ender’s Game, Maze Runner, Burlesque, the fucking Hobbit movies – literally anything with a plucky outsider.

So you can’t do direct aggression, because then it turns into the Protagonist Proving Their Worth, and that negates the hero-worship. What Infinity Ward do is a little trickier. They have the soldiers talk shit about you behind your back, and then act perfectly nicely to your face. It starts in the cutscene while the level is loading: Price goes ‘what’s the bad news?’ and Gaz goes ‘We’ve got a new guy straight out of selection,’ and you can imagine Price just going ughh. And then you meet Gaz, and he’s polite and efficient and even cracks a joke or two – but you know he secretly doesn’t trust you. You’re new, you’re a risk. He’s monitoring you, judging your worth to the team. It doesn’t turn into Plucky Outsider because there’s no tension or hostility offered from Gaz in person. He’s self-effacing and even charming. Price gives you a minimal amount of sass (“What kind of name is Soap?”), but aside from that it’s just professional, pure business. The game creates a tension between public and private behaviour. Privately, they don’t trust you. Publicly, they treat you in a normal, neutral, relatively friendly way. As a player, you’re restricted to that more superficial public relationship. You know they don’t trust you, but they won’t acknowledge that they don’t trust you, because that itself would involve opening up and being honest about their feelings. You want to get into that inner circle, where people will tell you what they really think, and so you want to prove yourself trustworthy, so that you can change their minds and be admitted into that inner circle. That’s how the game maintains its hagiography – by never fully letting you in. You’re not kept out by aggression or hostility, but by your awareness that these characters aren’t being fully open with you about what they actually think. It’s a lovely little narrative trick to maintain your adoration of Price and the other soldiers.