Shadow of War: Fear and Batman

To date, Batman: Arkham Asylum remains one of the only video games where I’ve bought a physical special edition. I got a little booklet, a batarang on a stand – it’s pretty stupid, but fuck does it make me happy. I really treasure that game. I also particularly enjoyed the combat system. Left click attack, right click counter. Clean, simple, precise. When the Shadow of War-dor games came out, they had the exact same combat system, very clearly lifted from the Arkham games. Let’s start off by tabulating some of the other similarities, and then think about some of the differences.

So the basic combat system is lifted wholesale. Left click attack, right click counter. If you want to shoot an arrow, you hold down the right mouse button to aim; in Arkham, you similarly hold down the right button to aim your batarang. In Shadow of War, you’re given a warning before an orc hits you, in the shape of a semi-circle with arrows above the offending orc’s head. It’s normally white, except for right at the moment before impact, where it will flash blue, allowing you to make a special counter. Arkham Knight had a similar feature, where the light blue counter would flash and grow larger, and if you countered in that space you’d pick up your enemy and throw him. The counters even look similar: in Arkham it’s five lightening bolts arranged in a semi-circular pattern, and in Shadow it’s three spikes with the semi-circle made explicit. Further, when attacks are impossible to block, they’re coloured red in both games. You chain your moves to build up a combo meter, and when it reaches a certain amount, you can perform a special takedown move, which immediately incapacitates or kills an opponent, depending on the game. In Arkham, it’s called an Instant Takedown, and in Shadow it’s an Execution. 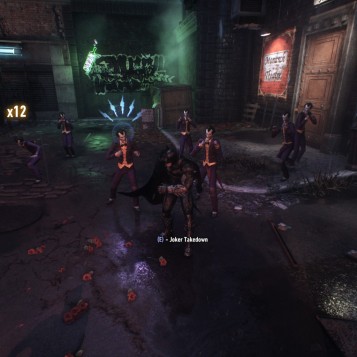 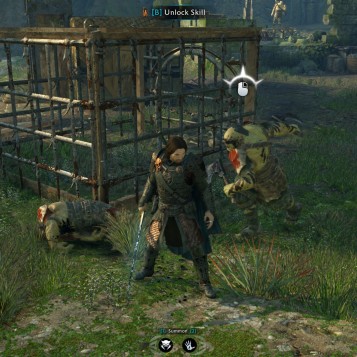 Some features also appear to be drawn specifically from Arkham Knight, the fourth and final game in the Arkham series. Just in terms of the timeline here, note that Arkham Knight was released in 2015, and Shadow of War in 2017. So for instance Arkham Knight introduces the Fear Takedown, where if you’re in stealth mode, you can instantly take down 3+ henchmen with a special slow-mo attack. Shadow of War rips off the same process, allowing your wraith to teleport between unaware orcs and murder them all at once. Oh, that’s right – in the Arkham games, you move very easily between stealth and fist-fighting. The difference is basically whether or not thugs can see you. Shadow takes that system wholesale as well. Some of these systems do obviously also have precedent in other games – for instance, in Shadow you can get an upgrade that allows blue counters to be instant kills. This upgrade echoes the counter system from the early Assassin’s Creed games, where a counter was basically a guaranteed kill.

And I’m not bringing these points up to shame Shadow of War-dor, right. Games can model themselves on other games and it’s fine, as long as they’re bringing their own interesting additions to the table. No: I’m only emphasising this line of influence so strongly because both games share the central theme of fear. I don’t know whether it’s a Warner Bros thing or what, but both franchises are really interested in fear. In Batman, fear comes through in the stealth sections. The bad guys have guns, and you’re not really bulletproof, so you have to take this indirect route and psych the bad guys out. You sneak around and silently knock them out, so they’re always stumbling over new unconscious bodies, and then eventually the last guy is a quivering wreck. In Shadow of War, it’s slightly different. The Shadow games are both about the Nemesis system, which randomly generates Orc Captains with a bunch of different strengths and weaknesses. It’s a way of giving them a sense of personality, a way of making the fights seem more individual and personal. I’ve talked about it at length before, so I won’t go over it again. I just want to note that the weaknesses for different captains aren’t presented just as weaknesses. They’re also presented as fears. 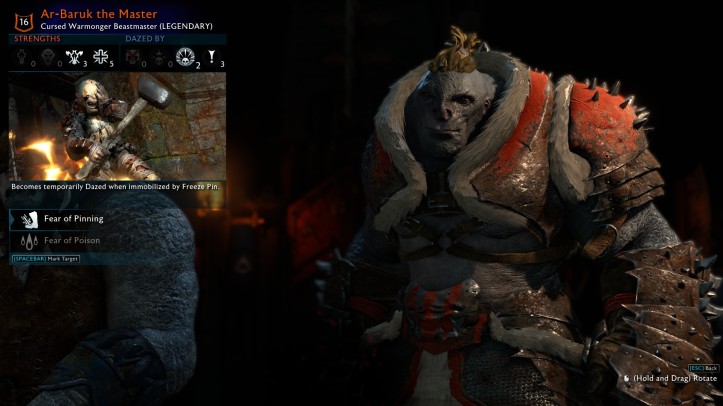 So this is Ar-Baruk, a randomly generated Orc Captain. You can see here that he’s got a fear of pinning, which is where you shoot an arrow through his foot and into the ground so he can’t run away, and a fear of poison. You can exploit those fears to stun him. Other orcs will also have additional fear-based weaknesses, such as ‘Craven’ (“flees in terror when faced with higher level enemies”), ‘Intimidated’ (“flees in terror upon seeing his rival”), and a whole long list of traits structured ‘Terrified Of X’. In a way, then, Shadow of War seems a lot meaner than the Arkham games. In Arkham, you’re using fear out of necessity – you’re just not strong enough to take on dudes with guns in a head-on battle. In Shadow of War, you probably could whittle them down easily enough without exploiting their psychology. You probably don’t need to terrify the little fuckers. Probably don’t need to torment them. I dunno – there just seems to be a slightly nasty edge to the game, if you stop to think about it. One of the skills you can acquire is ‘Brutalise’. It’s where you’re in stealth mode, and you jump down and brutalise an orc, just really viciously murder the shit out of him, so all his friends will run away screaming. You can also – here’s a good one – you can also get an upgrade that allows you to instantly explode the heads of all your orc followers, causing nearby enemies to panic and flee. I mean fuck, I know they’re meant to be Just Orcs, but holy shit.

So I started thinking more about the actual philosophy at play in Shadow of War. In Batman, it’s pretty clear: he doesn’t kill people, because killing is bad. I guess we’d call that the philosophy of war in the Arkham games. In Shadow of War, the philosophy seems to be a lot more dour. You can do whatever the fuck you want to other people, up to and including exploding the heads of your own fucking followers, because they’re Just Orcs. Just Orcs who just happen to have a complex psychology that evolves over time and makes them seem like the most relatable and frankly most ‘human’ characters in the game. Just Orcs. The great achievement of the Nemesis system seems to pull the game into conflict with itself. It’s too psychologically detailed, and that works against the disregard we’re supposed to have for these characters. When you start from that position, you really begin to query the parallels between Sauron and the protagonist. They’re not intentional, but they’re funny. They’re these accidental little moments that show up some of the hollow philosophy at the core of the game. For instance, both characters have their separate Rings of Power. There’s also a bunch of not-Palantir towers that you have to capture; you get up the top, and they’re controlled by Sauron, and you expunge him and take control for yourself. One fascist displacing another. Red replaced by blue. And then Bruz has a line when you first capture his mind: “Bright lord, dark lord – same thing really.” Same thing indeed.