I’ve been playing through Mirror’s Edge again, trying to get to that final scene where you have what, to my memory, is a more-or-less compulsary punch-up. Along the way, I’ve been trying to avoid fighting and shooting people, and it’s surprisingly easy. Well, I mean, they shoot at you, and you get winged quite a bit, but if you get your speed up and just chug along things generally end up alright. I’ve shot a few baddies, just to see how it goes, and I do agree the fighting and shooting is clunky. It doesn’t let you run while you’re holding a weapon, for instance – but I do still think that’s intentional. I don’t think it’s a game that wants to encourage the shooty bang-bang lifestyle. Anyway, that’s not what I wanted to talk about today.

What I noticed, playing through Mirror’s Edge, is how surprisingly linear it is. I know that’s basically the opposite of what I was saying last time, but bear with me. I still maintain that, in comparison to something like Call of Duty, there’s actually lots of options as to how you navigate space – although I think it would actually be interesting to examine Call of Duty more closely and see how/if it facilitates different gameplay strategies in one environment (single-player, I mean), because I think it’s getting something of a hard rap. So yes, Modern Warfare is generally characterised as shooty corridors, and yes, Mirror’s Edge has something of a contrast to that in the variety of ways to go through a level. We talked about all that last time.

Even given all of that, what struck me on this Mirror’s Edge playthrough was the extent to which you are just playing linear levels. They’re still largely quite flexible linear levels, but the maps themselves are linear. Your job is to get from Point A to Point B, which means that the environment, the city architecture solely exists to facilitate that passage. It almost feels curated – I’m coming away from Mirror’s Edge now with the feeling that I don’t have a sense of the city. I simply have a series of curated linear levels where my job is to progress from Point A to Point B. Everything that happens along the way is scripted, designed to be received by a player passing through the same singular map. There’s a degree of mitigation in the various pathways through the environment, but there’s still a much more fundamental issue in terms of the larger level design.

The distinction becomes very apparent when you compare Mirror’s Edge to games like those in the Arkham and Assassin’s Creed series. We’ll start with the AC series, because it’s probably more comparable. There’s the whole free-running gig in both of them, lots of climbing and leaping and so on. But where Mirror’s Edge is a series of linear levels, we can theorise the level design of AC as essentially a giant playground. That’s really fucking cool, because it means the city exists on its own terms. It’s not just a prop for missions, because you can wander off and goof around. There’s still the same sort of navigation that you find in Mirror’s Edge, but it’s largely on your own terms.

Okay: unpopular opinion time. I maintain that Assassin’s Creed 1 is one of the best AC games – at least on one particular front: the assassinations. I thought they were awesome. I’m aware that there’s a number of other very significant issues surrounding gameplay, controls, the repetitiveness, those fucking Templars – I know all that, but I still love AC 1, because it gave you so much flexibility in terms of how you carried out the assassinations. Not all of them, to be fair – some are very prescriptive. But there was enough freedom to really make me happy. Basically the more similar to Hitman the assassinations were, the happier I was – but the series moved away from that, and more towards heavily scripted, heavily linear story missions. Personally, I reckon that was a mistake: the advantage AC had over something like Hitman was the cohesive open city in which you went about your business, and keeping the assassinations open (ie miminally scripted) supported that open city vibe. By contrast, in the later games, I always felt like the heavily scripted story missions were the worst possible decision. I mean: 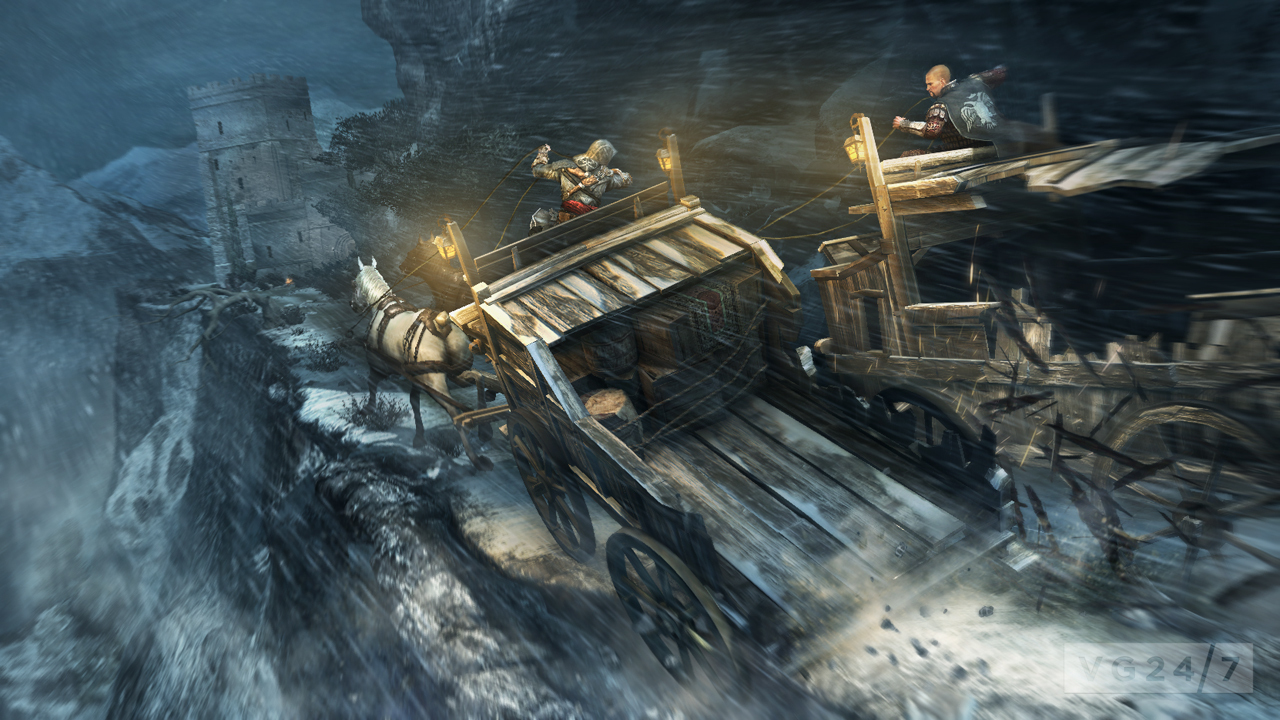 Let’s be honest, that shit was getting ridiculous. The Arkham games have a similar thing going on – they’re more comparable to AC than Mirror’s Edge, but the reason I raise the example is because Gotham City is such a great place to explore. It’s a city on its own terms, and, like any decent city, it’s stuffed to the gills with things going on. There’s riddles and fights and hostages and bullies – and you don’t really need to do any of those things, but they’re there, and you can go around the city whichever way you want. There’s also some great evolution of the city throughout the game – I’m thinking of Arkham City in particular here. The city really changes over the course of the game: shit gets blown up, yes, that’s one large and obvious aspect of change – but there’s also change in the distribution of power, as different super-thugs usurp locations of power from each other. The criminals become more and more gang-affiliated throughout the course of the game – you’d be hard-pressed to find an orange jumpsuit by the end of it, and if you do, they’re probably being terrorised by one of the gangs. The thugs become more militarised, there’s defections, coersions, shootings, you can hear commentary on the political state of the prison in passing – there’s just so much going on besides Batman.

It’s a good way to understand the problem with Mirror’s Edge – at times, it feels like you’re the only thing going on in that blasted city. Cities should be huge! They should be populated, they should make you feel insignificant. By nature video games tend towards the power fantasies, and neither AC nor Arkham break that trend, but at least their cities feel a bit more like real cities. They’re actual places, not Disneyland fun-rides.