I said a few weeks back that I accidentally bought Sniper Ghost Warrior 2 under the mistaken impression that it was from the Sniper Elite series. Coincidentally, Sniper Elite 4 then showed up in the monthly Humble Bundle, so I picked that up – and it’s an interesting contrast to SGW. For one, it’s not shit (ooh burn). There’s also the x-ray bullet vision thing, which we’ll chat about, and – the main thing that I want to talk about – the level design.

So for Sniper Ghost Warrior 2, I focused on how the game was structured. You were part of a two-man team (usually) of spotter and sniper; the spotter told you who to shoot, and you shot them. The game as a whole is really tightly scripted in that sense – you’re given very specific instructions about how and when to shoot different enemies. Sniper Elite 4 goes in the opposite direction, letting you run free in a huge open-world environment. It allows for different play styles, in that sense: if you want to be sneaky, you can be sneaky, and if you want to go shooty bang bang, you can do that too. There are also a series of secondary objectives that you can chase up – so each mission has the one primary goal, and then a series of other little things you can do in your spare time. That adds further variety to the game: you might decide to do some of them, or all of them, and you might decide to do them in different orders each time – so there’s lots of flexibility.

And that flexibility is sort of what I wanted to talk about today. Obviously the game goes in precisely the opposite direction to SGW. It opens the game up rather than narrowing your options. That’s kinda cool, because it means that in a sense you’re responsible for your own decisions. If you fuck something up and get rushed by a hundred Nazis, that’s your fault. You did something stupid. At the same time, Sniper Elite also allows you to make up unexpected cool shit. SGW was interesting because everything was really tightly scripted, meaning that the game could control the regularity and flow of cool scripted events. In Sniper Elite, by contrast, those cool moments are largely something you have to create yourself. And it’s not impossible, by any means – there are really elegant solutions to various gritty problems. At one point, I needed to get into a base and steal some papers, but the guards were pacing too regularly and I couldn’t find a window of opportunity. So I blew up a truck down the road – everyone stopped, jumped into cover, and pointed their guns towards the truck. Because they weren’t patrolling any more, they weren’t covering all the entry points with that really regular pacing, and so I was able to sneak through one of their gaps. That’s the kind of shit you can get up to.

There’s different pros and cons to each style, really, and I don’t want to say that one is more right or wrong than the other. In some regards the comparison is unfair, because SGW is kinda shit, and Sniper Elite is generally not. But if you consider a game like Modern Warfare, say, you can see that more heavily scripted process playing out with better results. All that said, it’s also interesting to note the ways in which Sniper Elite does structure its gameplay. Open-world never really means open-world, right – the game still has level design, it still structures your play and has a bunch of things you can or cannot do. For instance (oh boy it’s shitty image time again): 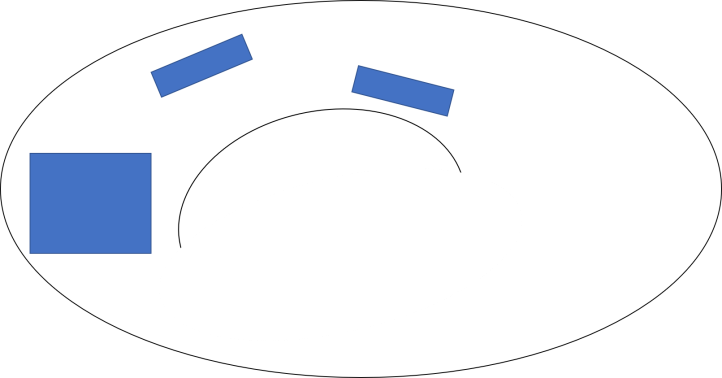 So here’s a really crude shitty little map that shows a bit of level design. There’s the edge of the map marked in, three buildings in blue, and then that centered black line represents a hill. It’s actually fully round – you can’t get up from the other side – but for our purposes, it’ll do. In this scenario, there are secondary goals at the middle building and the building on the right. You start in the building on the left. In the most basic sense, what we have here is a corridor effect. You’ve got the edge of the map on the high side, and the hill down the bottom providing a second ‘wall’. Together, they contain the experience – they funnel you into this corridor and limit the gameplay space. It also limits your options – so here we have a road that passes through between the buildings, just curving along the edge of the map, and a smaller, more shadowy footpath against the curve of the lower hill. If you walk along the road, you’re probably going to be seen and shot by the guys in the middle building. You might rush from bush to bush while they’re not looking – that’s a valid option – but already our supposedly limitless gameplay options are being sectioned off into two or three practical approaches, each of which is consistent with a particular play style. The third option, of course, is to crawl along the shadowy footpath in the base of the hill – it’s slower, but you’ll probably get away without being seen.

Now, a problem with the footpath. It’s against the lower hill, right – so there’s quite a distance between you and that middle building. You have to come off the footpath and make it across the road to get inside – keeping in mind that this is a stealth game and most of your weapons are very loud. You could start a gunfight, although if you do, everyone from both adjacent buildings will turn up and murder you. Alternately, you could take out everyone in the building on the left, and then move up to the middle building and kill everyone there too. Again, it’s a workable solution, but you can see how your gameplay responses are being really directly shaped by the level design. In some ways, at least with Sniper Elite, I think it’s less helpful to think about the game as a sandbox – it’s really more a network, a series of interconnected nodes. Each building represents a node, and by and large there’s going to be very little interplay between those nodes. Maybe if you go and shoot up the middle building you’ll get rushed, but for the most part the nodes are pretty largely separate.

Not all of the levels are designed exactly like this, of course – it’s just one little section that caught my eye. But I think there’s a broader point here about how we think about open-world games. It’s not the case that Sniper Ghost Warrior 2 is heavily scripted and Sniper Elite 4 is just free and open – there’s actually really clear and strict structuring as to how gameplay happens. You might not have a character literally telling you what to do, but the structure of the environment punishes some gameplay behaviours and rewards others – and that’s another type of control.